This would be the Matron, inching her way back from the Fourth Annual Thompson Backyard Theater Production--starring and directed by, Scarlett. There she is, pausing between orders. 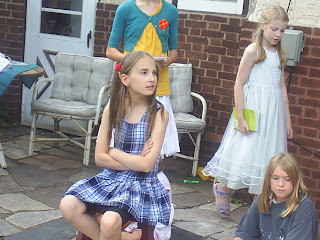 Every night from 5:00-8:30 about 15 children undertook the serious but pleasurable business of Art. They worked, folks. They memorized songs, script, blocking and dance. See this child? 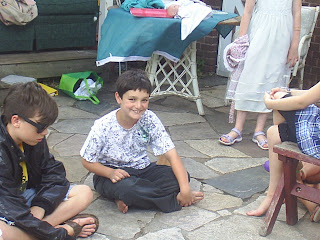 He was Howie in Ramona and is every bit as insane as her daughter. Get the two of them together?

Scarlett: "Who's your favorite actor?"

Naveh: "Beside me? Then Phillip Seymour Hoffman and Tom Hanks only in Philadelphia. And you?"

Scarlett: "Beside me? Then that would be Meryl Streep, Julie Andrews and Anne Hathaway. Okay, now local talent. Who?"

Naveh: "You mean beside me?"

The Matron did not even ask his mother for permission to put him on the blog because he already currently resides in the public domain. Here is the stage on which the production unfolded. 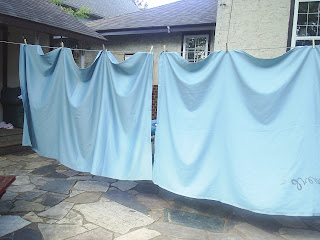 There were several six year old fire-fighters. Here is a conversation that occurred between one of those, Joey, and his 9 year old brother, Sam, who was not in the play but bore witness to Scarlett's firm hand.

Sam: "Wow. That Scarlett sure is bossy."

Joey (who has been in theater exactly 3.5 hours his entire life, considering rehearsal started at 5:00, ended at 8:30 and it is now 8:35) with passion: "That's because she's the director!"

A convert, that fast. The Matron apologizes to his mother.

The Matron will admit to wee bit of weariness by the time the final Friday night rehearsal rolled in. Despite the fact that she suffers from a severe and perhaps even certifiable Incurable Clutter Brain Suck she allowed the clean wooden halls of her hallowed home to become a back stage production area. For seven solid days -- little piles of angels wings here, sunglasses and suit coats there, dining room table and plates over in that corner. Every night those children roared their way through a dining room full of food and the spoils flew. You get the picture.

During rehearsal week, she conveniently had two huge work deadlines and, because she has so much spare time, decided to take a play writing class so that her work could be critiqued and rejected in yet another genre. If only she could do poetry, she'd be a completely well-rounded failure. Then there's Abby the Foster Dog, who, it turns out, has a real taste for the flesh of children.

All three of hers are currently terrified of this dog. Two have been bitten. The director is thus far, spared.

But on that weary last day of rehearsal (you try spending seven nights in a row with 15 children who sing, dance and do NOT mind being center stage every minute), one parent showed up with this! 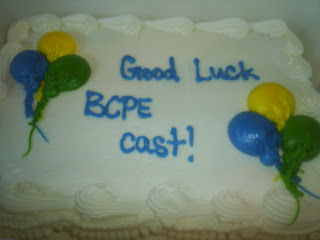 Call her sentimental, but the sentiment brought a little tear to her eye. That, or it was that three of the six-year old firemen were taping themselves shut into small containers and boxes with duct tape?

Matron to large plastic tool container duct-taped shut: "Merrick are you in there?"

Matron: "Can you breath?"

Little silence while he is testing.

The children greeted that cake like magic. It sat alone on a place of honor and they all paid homage, shuffling through.

"Did you see that cake!"

"That is the BEST cake ever for the BEST pageant ever!"

It warmed the Matron's crusty little heart to see something so simple bring genuine joy -- and gratitude.

She too was grateful for that cake: thank you!

And thank God-Allah-Oprah-Buddha-Universe the show went off without a hitch. The curtains are packed away until 2010 and on Sunday, the director informed her family that she had just gotten her first real sleep in a week.

"Well you and Dad didn't know this but I did not sleep a WINK all week. I was completely stressed!!"

Love it! Those kids have got gumption!

No pics of the performance?

You do know why the dog didn't bite Scarlett, don't you? The dog is no dummy. Scarlett would kill him. Instantly. With a withering look.

I am so sad I missed the production. Thank you for the invite -- maybe next year. There will be a next year, right?

No pics? Or to be even more demanding, where is the documentary?

Yes! Bring on the video!!

I marvel at the Matron's fortitude for her yearly hosting of all sorts of show people for their extravaganza. I hear those actor types are a sketchy lot. Bravo!
Fireman word verification:
hosistyt.

"That's because she's the director!" I love it. This kid gets it. And "Besides me?" Oh, the ego! But an actor must have ego; it translates as confidence in the theater world.

Pictures are on the way! I didn't take any but other parents are sending.

What was the name of the show? Was it an original?

The Best Christmas Pageant Ever