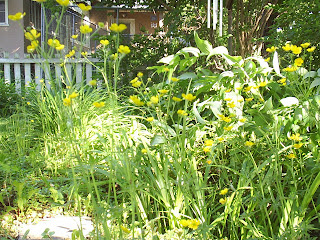 The weekend? Magic. The children weren't just hers: they were universal, timeless. During the course of an hour, Merrick sang on a skateboard, hunted frogs, built a stick fort and questioned death. They were all limb, mystery and joy. She marveled at their existence -- and the expanse open to them ahead, the large unknown life that is only beginning.

Because for some reason (thank you God-Buddha-Oprah-Allah-Universe), the Matron woke to a sun-washed, stunning summer June day, fully - viscerally -- grounded in the reality of a recently experienced late afternoon in December, which looked like this: 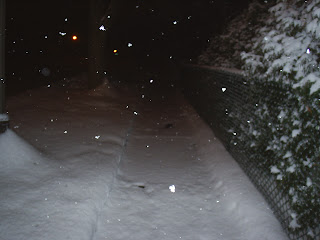 And for some reason, the Matron carried Night with her this weekend. June ends. Childhood passes. Her house is nearly 100 years old. A century ago, another family's stories shaped the same hallways and arches that she walks through today; those people are gone - forever. She will be, too. The children will soon be different people. One day they'll be adults, old, and facing their own demise.

She guesses it's possible to appreciate this differently 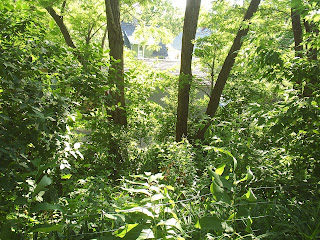 knowing this is right around the corner. 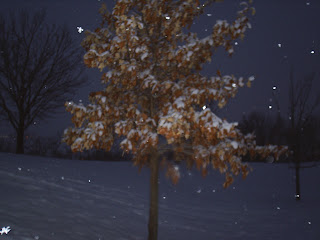 Like life. Not that there isn't beauty in Night. It's possible. But the beauty and grace night holds -- old age, death, change, seperation -- is hard-won and self-reflective, quite unlike the abandon of children in the summer time.

She's grateful for today's gift, knowing how quickly it passes.

Posted by Minnesota Matron at 7:12 PM

Lovely. Summer in MN is short and magical.

There is beauty in your assessment of it all as well.

Be thankful for your winters!! I am another world away in my desert, my desert of long-hot-never-ending summers and not a winter in sight, never! I miss snow and I hate when it gets hotter than 107 degrees :P

Love every f**king moment of it, Matron, even in the wintertime, it's gone before you know it.

In Joan Didion's "The Year of Magical Thinking," she begins: "Life changes fast. Life changes in an instance. You sit down to dinner and life as you know it ends." She then unfolds the meaning of these lines in an elegaic memoir of love and loss.

My son, already 10 months, reveals to me so much of what will soon pass and never again be relived. I revel in much, and mourn today.

Word Verification: foxic... for some reason, this really cracks me up.

Um, did you really have to post that picture of winter? I would have been FINE just picturing it in my mind. Really excellent post tho.

We enjoyed one of the few "good" MN summer days on Saturday too.

I am so glad I found your blog. Your writing always makes me feel something.

I felt that way all weekend, too.

I've tagged you--somehow I think it'll be right up your alley.

Every night as I kiss my girls before I go to bed, I think of how tomorrow they will be another day older. There's a certain sadness in that realization.

There is something eternal about a summer afternoon. Thanks for creating an evocative post that will be ready with the summer sunshine long after the cold returns.

Thanks dear reader friends, for your kind comments! They make her (our) day :-)!

Your post makes me think of Elie Wiesel's book, Night. Both stories that could be about darkness, but is really about the reflection of light.

Winter has its own beauty. I enjoy the changes, and I know I'd miss the seasons incredibly if I moved South.

Yes, Cheri. I recently read Night and thought of that book while composing . . . .

It's always good to commune with nature when meditating. Good thing you have a great outdoor atmosphere.