The Matron is going to hoist herself on the meme bandwagon--only because this is a meme of merit, which started with Historiann's first lesson for girls. She was followed with pith and wisdom from Dr. Crazy, Professor Zero, Sutton, Undine, Exile in Academia, Geeky Mom (oh how the Matron agrees with this!), and Squadratomagico.

Let's start with a story. When the Matron was but a Young Miss, oh, in the 14 or 15-year-old ballpark, she wanted to be Deirdre Garner---the super star of 10th grade. You knew the girl. Your school had one. This one was beautiful. Blond. Her father owned a successful local business which meant that Deirdre had too many pair of Levis to count and the best of everything else. Cheerleader, student council, choir, band, track and swim team. There was nothing that Deirdre could not do and nobody who wouldn't pay to walk in her wake.

Young Miss remembers sitting in a desk a few rows behind Deirde, pining. There was something so deft about her movements, so winning, so sure. And she was pretty! The dimple, the quick smile! Whereas Young Miss felt herself a bumbling mass of uncertainty, Deirde flourished, firmly rooted and secure as the center of senior high.

Young Miss wanted some of that confidence for herself.

Until the day that Herr Ewing asked Deirdre to conjugate a verb in German class: wollen. Young Miss was admiring the way Deirdre screwed up her face to concentrate. How she wiggled her pen and squinted. Adorable. The way Deirdre so cutely shrugged her shoulders and said: "I don't know."

Over the next few minutes, an increasingly alarmed Young Miss tried to send Deirdre the answer via ESP. She tried to radiate across the aisles: ich will, ich wollte, ich habe gewollt, du willst, du wolltest, du hast gewollt. . and so on.

But nothing happened. Deirdre exited a puddled mess, after an agonizing effort in which she demonstrated not even the most rudimentary understanding of concepts she'd been supposedly studying for two years. The teacher simply did a mercy killing and moved on.

Young Miss's entire world spun on its axis and did a Major Planetary Reaslignment: Deirdre was not smart. Young Miss was! And being smart was much, much better.

Young Miss's desire to trade assets with Deirdre were forever lifted that fateful day. Deirdre did indeed peak early. She got pregnant her junior year in high school, took a job at Wal-Mart and that was sort of that.

Unfortunately, women in this culture are primed to peak early because we're most valuable when we're sexual players. Hot. The object of the Male Gaze, all that. We're supposed to develop and work our assets, and in most cases that does not mean the brain.

The Matron can think of many examples of the female body as the path to success, but the one sitting on her desk will suffice. Every month, Vanity Fair opens its "Vanities" section with a portrait of a ripe young actress, about to take off. 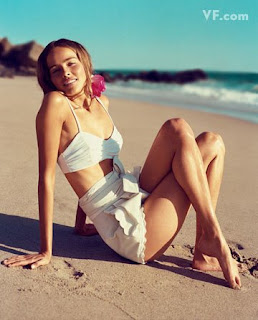 These young women are invariably presented as about to burst on the scene, about to arrive---indeed, the first page of the Vanities assumes a star to soar, a career to start peaking. The Matron wonders why she cannot think of a single man who's been on that page! Maybe because there hasn't been one? Or so few because it is a woman who is going to peak when she's sexually ripe and the man who peaks on the rim of life accomplishments?

Just ask Susan Sarandon or Jessica Lange -- or the Matron. The power and appeal of the female body diminishes with age, and so do the social (problematic but real) rewards for having the type of body the culture values. Rely on your physical appearrance for life's goodies---recognition, success, confidence, achievement --- and you will find yourself washed up against that shore of age, without recourse. A well-fueled brain and sense of justice constitute a much stronger lifeboat: they can carry you for decades.
Posted by Minnesota Matron at 8:54 AM

There's a second grader I work with a lot...she looks up at me with her clueless blank eyes and bats her eyelashes and I worry for her future.

What a great post!! This really should be read by a lot of people.

On the other hand, Meryl Streep and Helen Mirren are both more beautiful now than they've ever been....partly because of their talent.

Ah, yes, the ones with the future jobs in the M&M factory - sorting out the W's. Or is that Ws?

What a great post. I never though of that feature in Vanity Fair in that light.

I always admired the girls who could twist their long, thick hair into buns held up with a pencil. Meanwhile my mom was trying to convince me "the pixie" was the epitome of style.

Wise words. For most of us there is a lot of life left to live past high school. Who would want to live it always looking back in longing?

I recall the girls vomiting/crying in the bathroom on grad night in Gr 12 that these were the best years of their lives. I thought, "What? I can hardly wait to get out of here!"

You hit the nail on the head about culture and women. I'd much rather shine in late light!

We had one of those too, our fathers were actually partners in a law firm. And I have to admit I chuckle when I see her trying on Facebook to keep up with her high school image. I am so glad I have gone on from that time. So glad.

Hmm Well I was just searching on Google for some psychic readings and psychic articles and just came across your blog, generally I just only visit blogs and retrieve my required information but this time the useful information that you posted in this post compelled me to reply here and appreciate your good work. I just bookmarked your blog.