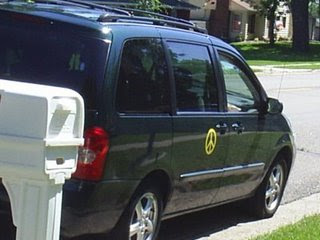 Thanks in advance for all that love and light and friendship. She needs this crisis to be over. Soon.
Posted by Minnesota Matron at 4:22 PM

Maybe this joke a friend used to tell will give you a smile.

A group of long-married men were talking about sex. One man said, "My wife and I have hall sex all the time."
The second man looked interested, "Hall sex?"
"Yes, we pass in each other in hall and say, 'Fuck you!' to each other."

Good luck with all you're dealing with.

I'm glad you had a nice moment amongst all the trauma.

It sounds like the state of the union is strong!

Thinking of you MM. Hang tough.

And that was totally sex.

Drive-by sex. How "today." Thoughts and best wishes still being sent your way.

After so many years and so many responsibilities...drive by sex can be quite nice...sometimes it's all you can get.

I'm going to put a peace sign on my van and have an affair. ;)

My thoughts are with Grandma Mary and all of you.

They say the brain is the biggest sex organ. I am glad that you are driving distance from Grandma. I have issues going on with mine and my mom and they are a 10 hour drive, or a flight. Hang in there!

I wonder if my husband would buy that. Nah.

I tried telling mine the other day that when I fly over the house on Monday mornings, 'pretend I'm on top'.

Good thoughts following both of you on your way.

I hope all goes well for you, no matter what the outcome from Grandma.