Just Ignore The Alien Space Ship in the Corner 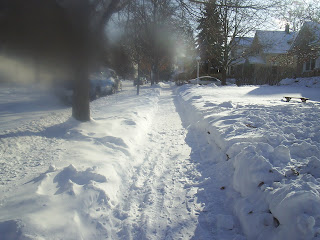 The Matron's photography skills are legendary for her lackthereof. These pictures would be primo examples of her complete ineptitude and her unwillingness to spend another five minutes trying again.

Don't you love her?

But if you can ignore the Alien space ship or perhaps Alien frozen breath in the upper corner, it is possible to understand what the word "Minnesota" really means in December. Yesterday? Entire buckets of snow were dumped upon her.

Now, normally, the Matron is a runner. As in every day, except when its below zero.

But while she was contemplating the deed, she decided that good old fashioned Activity would be her exercise. As in shoveling. You see, the Matron and her husband? Are currently responsible for shoving their entire block. And then some. Because this neighbor is in her sixties and her husband, away, yesterday, the Matron shoveled out this house: 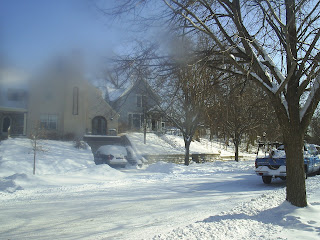 See that blue house tucked behind the pink, above? Well, that neighbor recently broke his neck, felled by a walk in his sleep that turned into a tumble down stairs. He broke other bones too. So the Matron and her husband will be adding this house to their permanent list. Which includes the neighbor below, because she and her 18 year old son appear in capable, year after year: 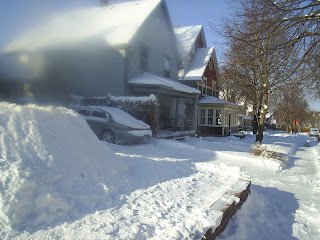 This is the four foot snow fort the children built! 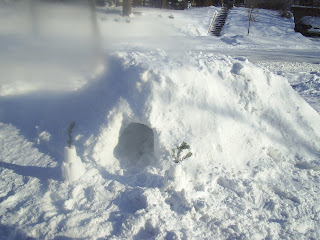 And she shoveled, as usual, her immediate neighbors, who are in their late seventies, and frail. 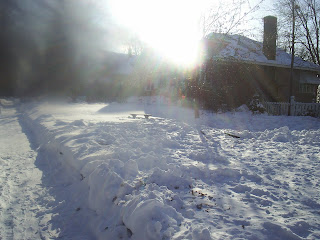 Thanks for the workout, Santa!

But today, the temperature is just dancing around zero --below, above, below then above. And the Matron cannot find it in her sturdy constitutional to don the four required layers of clothing and run outside until it is a wee bit warmer.

Oh no! She's an exercise addict! She is newly frugal! What's a girl to do?

Why, the Matron is headed over to LifeTime Fitness for her FREE seven day trial membership, which should just about get her through this cold snap. Sure, she has to endure the 45 minute sales pitch. But there's a sauna!

St. Paul is home to Ballys, Lifetime, Anytime, Curves, and Sweatshop Fitness Centers -- not to mention all those YWCAs. Plenty of trial memberships to carry her through the most frigid air, no problem!
Posted by Minnesota Matron at 10:59 AM

Wow -- I'm surprised one of the houses on your block doesn't own a snowblower!

Personally, I'd probably stop shovling the house with the 18 year-old... unless he's missing a couple of limbs or has a heart condition.

This Wisconsin Woman must ask: do you own a snowblower?

Excellent use of the trial membership. This cold is painful.

You are a good neighbor.
And so clever to use your free trial memberships!

Your dedication to exercise extending to enduring sales pitches? I'm in double awe.

You are an extraordinary neighbor - I would make banana bread for you every day.

I worked out on Friday and then shoveled for two hours. Yesterday, I decided some cardio/step was just the ticket to unkink my back. Today, I tried Pilates. I understand that workout high that you MUST have during Northern winters.

And no snowblower here either. Just a 1200 ft. long driveway, parking pad, and sidewalk.

I have to know. Have you had mail? We haven't since Thursday.

I have a friend in St Paul, they were still getting snowstorms in April...hope you don't run out of trial memberships!

We just received 7 more inches yesterday. Lucky us too.

My husband currently removes snow in our driveway and two of our neighbors and we live out of town with those loooong driveways. I can't help since I have to stay in with the baby. Oh darn.

Yeah, I was listening to the "highs in the upper teens, winds at 20, gusting to 40" for tomorrow, and thinking "why did I register for a May marathon?"

And I live in New Jersey. Someone else you know will NOT be running tomorrow.

I'm so impressed. And I think I will swipe the trial membership scheme...brilliant.

And I'm out west feeling guilty. Because it was 40 this morning and I was shivery. You laugh.

I can sure see why my mother and most of her siblings migrated from MN to CA. They grew up on a farm in Moose Lake...(you know, where you had to walk 5 miles in the snow to school. Or was it 10. It got longer every time they told the story.)

You've got your good deeds racked up for the year! Hope the indoor venue was a pleasing change.

The fort is impressive. Brings back childhood memories...

Oh, I think that bit of fog is due to bringing your camera out from a warm house into the cold air and it not yet adjusting to the new outside temperature. I've had the same thing happen in the summer - exiting an a/c house to a warm outside and having the lense fog up.

Have a wonderful Christmas, Matron! I do adore your blog.

Way to work the deals, Matron! And, yup, shoveling will make you feel the burn, for sure, although I think you should pointedly leave unshoveled the sidewalk where the 18-year-old lives. Feh.

Should you end up outside for your run: Remember, once you take the 20 minutes to dress and the first 10 minutes of your run to stop the internal screaming, you do get warmed up. And then it's just fun...running in snow is like running in sand, and weren't all those Baywatch people very fit?

What a good neighbor you are!

Bummer about the non-functional snowblower. That is often the case here at Chez Kat, too, although it is more likely to concern a drivable car (husband is collector; he has 20+ cars) or startable lawn mower (numerous ones of those, too). Creative use of trial memberships, ma'm!

I have not been in snow like that in...let's see, forever. Here in south MS, we have "January" and "summer." Although, it is in the 40's here today. Brrrrrrrr!

Well, that's an alien something

Santa needs to bring you a snowblower.

Seriously, you are a good person. And so smart (the gym thing).

I LOVE all your snow. It is stinking hot over here where I am... Australia, by the way.