How She Spent the Weekend

Friday night, while the Matron and her family were at Holiday Outing, Satan's Familiar scrutinized the vast, unguarded landscape that is the Family Home. He decided that jumping onto the dining room table was probably the best use of Cloven Hoof.

He found not one Earth Ball, but one pound of this incredibly expensive, organic dark chocolate -- purchased as gift for someone else. But Satan's Familiar? 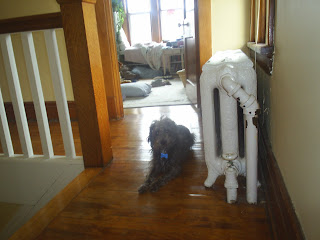 Assumed that said delicacy was just the evening's ticket. So he carried that bag from the table into the living room (sort of CSI -- the Matron sleuthing and all -- evidence, as in shredded paper and plastic by the family hearth) and shared the goods with Jekyll.

Let's refresh Reader Memory. Jekyll will be 16 in April. He does not walk: he totters. His eyesight is limited to one non-peripheral foot in front of his face. Hearing? Left him, lo these many years.

When the family came home, they found Satan's Familiar sleeping comfortably on the couch. Being from the dark side, supernatural and all that, he is immune.

But Jekyll? Running around and into walls, endlessly, heart pounding, all sugared and caffeinated up. Considering that chocolate kills the canine, the Matron poured hydrogen peroxide down the beloved Jekyll's throat (while John put the children to bed because, oh my GOD in addition to spending the past 30 hours on DOGS she has a full-time job and children).

While the elder puked up his half pound of chocolate, Satan's Familiar was subjected to multiple doses of hydrogen peroxide. How many times did he vomit? Not once. After that henchmen drank half a bottle and the Pet Poison Control Hotline didn't answer, the Matron assumed this was the Lord Himself, God Almightly, sending The Message: "Be Gone, Anti-Christ! Be Gone!" 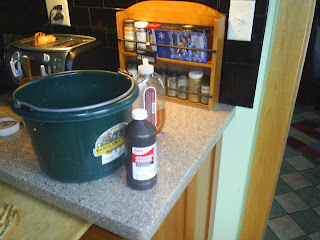 Okay, the heretical Matron is sorry and all excommunicated, but that damn Satan's Familiar refused to puke BUT the house became the Vomitorium and Toilet for the next . . . oh, what time is it right now?

Yes, she made use of Bucket, mop and soap.

But poor Jekyll? That first frenzied evening, that poor geriatric patient would not stop running around in circles until John held him tight for an hour, until he gave up. And fell asleep. 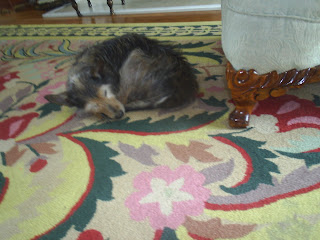 But when he did? The remaining foot of peripheral vision has vanished. Jekyll is completely blind and new to the situation.

So the Matron has spent much of today caring for that dog after he: falls down a flight of stairs; loses his way in the backyard and tumbles down the landscaped hill; falls into his water dish; and mistakes Merrick for a Dog Treat. Yes, that dog started rambling nibbling.

That's the weekend, friends. One million student essays and two weeks ahead, and suddenly the dogs needs as much navigation as Scarlett (because Miracle Worker rehearsals conveniently begin tomorrow).

And the heart-wrenching part?

Posted by Minnesota Matron at 6:24 PM

Labels: Theological Warfare. And do you read these labels?

Your weekend sounded exhausting. Please tell me there's some rest in sight.

So, now Jekyll needs a seeing eye person and that would be you?

I do now see why you have named said canine, Satan's Familiar. I knew chocolate was bad for dogs, but I had no idea... Nor did I know about the hydrogen peroxide being a natural vomit inducer.

Poor old guy!
My thoughts are with you all. I can't even think about, well, you know.
I hope your week is better than your weekend.

You are breaking my heart.

Oh my. Oh my. oh my. I think you need to kennel SF until the holidays are over! A kennel in Texas, maybe...

Poor guy. It's so hard to watch them deteriorate. *hugs*

Oh no. Not a good time. And poor pup!

Sorry to hear about Jekyll's downturn. We put our 8 year old dog down the week before thanksgiving because his health was failing. HUGS

I am so sorry (but laughing at your recital of the doings). It's so hard watching a beloved pet get older and older.

Hmmm. Just had a thought. Does The Miracle Worker need a vision-impaired dog in the cast? If so, Jekyll may have a new career.

I don't know whether to laugh or to cry.

We're all praying for Jekyll over here. Well, y'know, like we pray.

Good thoughts Matron. (and yes, I read the tags)

When I saw the first photo, I immediately thought (and said), "....balls!"

My initial response has not changed, on reading the rest of the entry.

Oh dear. I shall stop bitching about my statement of purpose now, mmkay?

I'm sorry to hear about the old dog -- We had a cat who slowly went blind. He did pretty well after a bit and even adjusted well to moving into a new place... I hope your old pup will too.

Awww... no matter what they do, we love them. Your dogs make me miss my Greta so much.

I remember the great pissing cat episode of last winter here at standing still, and I'm getting all empathetic with the Matron. Perhaps the Matron, at times like these, needs to pour some grain alcohol down her throat. Induces vomiting and forgetfulness in humans.