Scoop that Poop (and the Marbles, Leggos, Balls, and Half-Eaten Polly Pockets)

No school in Minnesota!! From the state college system (where the Matron works) to preschool, the doors close so that teachers can be all Professional Development and Important Workshop.

Now, the Matron knows not a SINGLE teacher doing this. Including her.

Instead, after tripping over one too many remote control police cars (minus the remote, long lost) she took a big green plastic garbage bag and went through every square inch of the house, finding and eliminating toys no longer in play. 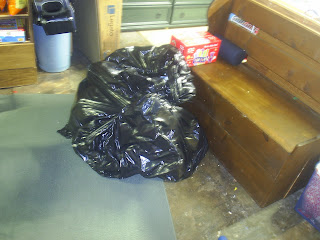 No. The best part was that Merrick loved every little bit. He stayed at her side, secure and true to the path, throwing heaps of junk into the bag.

Merrick: "I like my woom clean, Mama. Let's thwow out all the extras."

That apple!! Staying by the tree!

All of her 'isms' and assumptions came out and she was certain he was gay, after all (please? can't she get one gay son to happily take her shopping for the rest of her long, dictatorial life?), what with so much focus on clean and tidy.

She also tended to Command Central, the basement. This is where all the Stuff sleeps, until the Matron needs it. 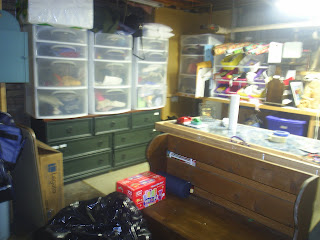 Okay. Everything sounds all "Matron Prevailed and Maybe Has a Gay Son After All so Life is Good."

But really? There remains, Scarlett's room. 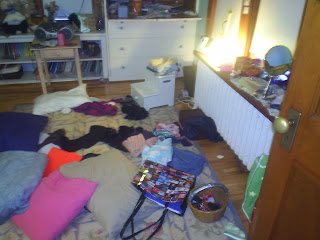 The Matron didn't even enter that black hole. And, part of her cleaning mission? 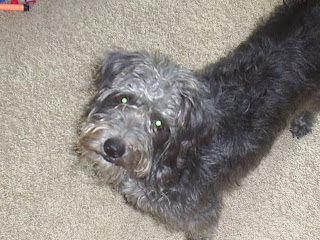 One week ago today, Satan's Familiar dropped 87.3 pounds of soggy poop in Scarlett's room. John had enough. Since Thursday, October 9 at 3:43 pm, S.F. has been tethered to a leash that the Matron or husband or sometimes a child, carries.

Briefly, they tried to put him in a canvas kennel. He ate himself out, chewing three big holes.

During this past week, Satan's Familiar has been taken Out of Doors for Elimination, many times. Rewarded with treats and ticker tape parade for every bodily function. Still. He's escaped exactly three times.

And pooped and peed in the house? Those three times. As in, he is free for, oh, 18 seconds? Just enough time to dash away, focused, for a pile of poop in the kitchen.

It's like he is PLANNING his next indoor poop. Ten seconds of freedom and that damn dog is bent on defecation.

So today the Matron worked on some of Scruffy's stains.

And late at night--just before this blog post---when she noticed that the Familiar had created a hole in the back yard fence (again), providing him access to Neighborhood and Freedom, with all that adventure (and cars, pitbulls, potential thieves) at his cloven toenail?

Did she run out and plug said hole?

Yes, when she closed the back door, it was with a smile.
Posted by Minnesota Matron at 7:18 PM

What a stinker! I am so sorry that your family is suffering this poop affliction. You probably already know about Nature's Miracle (that spray enzyme stuff), but if you don't, getcha some.

Keep Satan's Familiar and send Merrick to our house. He is a doll.

We have a cat who pukes -- often, because he's too stupid to stop eating plastic.

The best thing in the world is oure SpotBot-- You fill it up, put it on the stain, press a button and it does all the scrubbing and sucking for you. In either 3 or 6 minutes it beeps and you move to the next spot. They have a special formula for pet stains.... we got ours at Target for about $100.

If you have to go to that innane RSP conference (for CC's... aargh) in late Feb / early March we should meet :). I might even have hair then.

I've met cats like that. Only with vomit instead of poop.

I wish I had a basement--alas, we don't do those on the West Coast.

Awww man SF is a true test of compassionate living!

I would say a visit from the Dog Whisperer is in order. Or an exorcism.

SF looks so much like our Greta, who has passed away. I would take all of her bad habits back to spend another day with her.

And Merrick is a cutie pie!

By the way, I gave you an award today!

Your dog reminds me of a soap opera villian. You should've named him Stefano or something;)

Oh my, that dog. I've never heard of a dog like him before.

Merrick is so cute.

Laura would be the apple by the tree sobbing, "Don't throw that away. I neeeeed it!" She will be one of those hoarders you read about, found buried in her living room under 10 feet of her own stuff.

As for SF? I'm speechless. And that never happens to me.

What kind of pooch is Satan's Familiar because it looks a LOT like a dog we had that constantly dug under the fence for Freedom and who was finally sent to live with someone else because she drove me CRAZY!!!