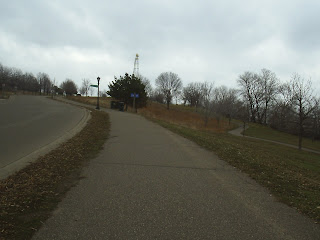 Today, this boy would've turned 21. This is his birthday. Here, the Matron updates his story. She's corrected an error in the narrative below. More importantly, she has an addendum. (that would be at the end - get a tissue and read on)


When the Matron confronts this hill on her daily 4 mile run, weariness overtakes her. Worse? See that slight bend ahead? This is what is on the other side: 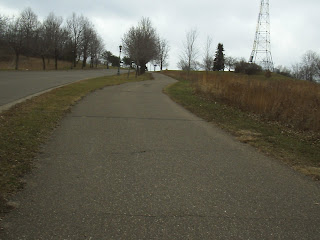 More hill. Lots of this.

Very. Every day, the Matron follows the city park path that runs right along a river bluff.

Sometimes she feels sorry for herself and a just little bit whiney. Oh, about everything.

The job interview, the wrinkle that is not a flexible laugh line but a permanent entity, the economy, Stryker's disdain for hygiene, the weather, that stupid hill she must climb one more time, Satan's Familiar, Scarlett's inability to fold a sock or close a drawer, the way her husband wipes his mouth with the back of his hand instead of a napkin (only when eating cereal).

The Matron frets and whines and puffs but then she eventually goes down the same hill and sees this, every day: 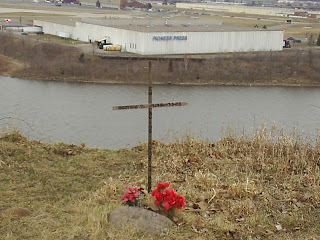 This is where a boy the Matron does not know but read about in the newspaper fell off the cliff and onto the railroad tracks next to the river, hundreds and hundreds of feet below. 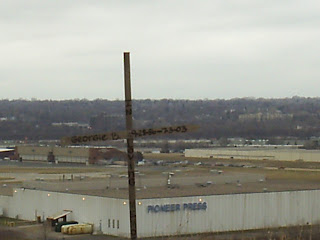 You can see, his name was Georgie.

Because the Matron's neighborhood is high above the city and boasts a spectacular view, he was here with thousands and thousands of other people to watch fireworks on the 4th of July.

Being a teenager and and immortal, he crossed the little wimpy one foot safety chain and got as close as he could.

His mother was standing behind him and got worried: "Be careful!"

He laughed: "I am not going to fall."

And being a teenager and immortal, and seeing the tiniest ledge below, he decided to play a little joke on his mother.

He jumped. But missed the ledge.

This is what the Matron read in the paper, nearly five years ago.

But every day she runs past that wooden cross. Sometimes there are new flowers. Sometimes a rosary or poem.

Every day she runs past that wooden cross and thinks about that mother and that boy and those few seconds.

She stops whining, usually because she has to cry. Again.

Near the July 3rd anniversary of that child's death the cross was removed for several days. When it was replaced, there was a woman's name on the cross instead and a little card sat by the cross for about a week that read:

"Because a big part of me went with you. Love, Mom."

Friends, the Matron believes there's something bigger than each of us at work in this world. Please give a piece of yourself--a prayer, a good wish, a little love --to this mother today, on the day she gave birth to the boy she lost.
Posted by Minnesota Matron at 10:14 AM

Thanks for the perspective.

I'll stop whining now. Instead, I'll offer thoughts of strength and kindness to the mother of that beloved son.

When your feet continue to run down that road
your heart continues to find the lesson on its side.

You have paid forward those lessons today.

I'm saying a prayer for that mother, and all mothers.

As the mother of teenage boys, I can put myself right there in that moment. I feel sick to my stomach.

I'll think kind thoughts for that mother who is suffering today and every day.

Thanks for this. I'll gladly give piece of myself. I only wish it would help heal her heart.

Sheesh. A piece of my heart to her indeed.

That is so sad.

It's a wonder of the human spirit that we can survive enormous pain. That such power exists in something so ethereal leaves me speechless every time.

And tissues were definitely needed. Prayers for this mom are sent.

This puts everything into perspective, doesn't it? Thanks for reminding me to be grateful and stop whining.

A prayer for this mom is the least we can do.

I was impacted by this post the first time around. Awful, awful stuff. Thanks for the rememberence Matron.

I remember this post and think of that mother often. I send her more of my thoughts today.

Happy Birthday George, and George's mommy. Indeed, our kids carry a piece of us wherever they go.

shrink on the couch said...

Happy Birthday Georgie. I hope your mom is reading, too.

I appreciate that you've shared this, not only because it is important, but it is the way that I, too, measure the extent to which I'm humble about what I have each day. "Thanking my lucky stars" isn't just a saying for me. You'll be in my thoughts as well as this mom and her boy.