As mentioned earlier, Scarlett is currently playing Maureen--the lesbian sexpot--in a child-led production of Rent. The Matron's most favorite things about this production?


But his child has been bitten by the theater bug, so what can you do? But all these contradictory dynamics please the Matron. That performance will be December, rehearsals on Sundays. Scarlett has grown ear buds, new permanent extensions of self that plug into her iPod which would be playing all the music from Rent, all the time!

Anyone entering the Matron's house might hear her 9-year old singing, loudly: "To Sodomy! It's between God and Me! S & M!" Etcetera. Once, the Matron asked her daughter if she would like some of the language explained and Scarlett said: "I'm not ready."

Last Tuesday, the Matron took Scarlett to audition for The Sound of Music at The Phipps Center for the Arts. Now, you really think the Matron would know better by now, but still, she was shocked to see the squirming mass of little girls. The auditions were held for three hours each, Monday through Wednesday.

Scarlett waited 2 hours and 45 minutes to sing her song, "Oh What a Beautiful Morning." Now, earlier the Matron had suggested, once, that Scarlett practice said song. But she couldn't be bothered. Still, the Matron brought this head shot and the resume. 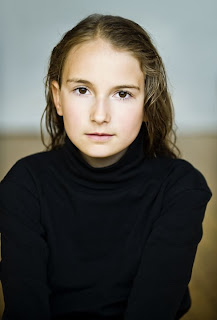 Scarlett: "I just love reading my resume! It's my favorite thing to do."

When number 116 was called, Scarlett got up, left the room and returned five minutes later with instructions for the Saturday callback. She was given sheet music and instruction: "Practice these songs!"

In the interim, when the Matron inquired after said practice, Scarlett said: "Mom! I've known all of these songs ever since my OWN production of Sound of Music in 2007. I'm fine."

And she is, because she landed one of those little girl roles of a lifetime, a Von Trapp child in The Sound of Music! She's Marta, and could not be happier! 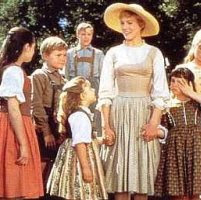 Rehearsals for THAT show start September 8, 7-10 pm three nights a week until the grueling 7 day stretch of tech week and shows in November. All conveniently located in ANOTHER STATE! Wisconsin! Hey there Green Girl and Angie! See you at the Phipps? It's actually just 20 minutes away, but still.

One month ago, the Matron got an email asking if her daughter would audition for this role.

Torch Theater and the History Theater have teamed up to stage this production in March 2009.

Now, the Matron was also instructed to have her daughter watch the movie and practice. Instead of practicing one whit or even really caring about the win, Scarlett has spent her time actively recruiting competition for the role among her favorite friends (just like her mother but with a lot less muck). The Matron loves that about her daughter.

Tomorrow is Scarlett's 10th birthday! And at 7:40, one of her best friends, invited by Scarlett, will audition for Helen Keller, followed by Scarlett herself at 8:00. Break a leg, baby! Today? Scarlett is spending her time training her friend to be Helen!!! The Matron could not be happier or more proud. That's the win, right there.
Posted by Minnesota Matron at 8:39 AM

You've got an amazing girl there - I hope she gets all the parts she wants!

Her mama's raising her right!

That Scarlett is just pretty darn awesome. Kudos to you, dear Matron, for keeping it real despite the fact your kid is flippin' brilliant.

I played Helen Keller as a kid. Just be prepared - I was one giant bruise all the time. It was soooo worth it.

She is so focused at her age. Wow.

Hats off to you both.

(And happy birthday to your star.)

Congrats on all her success!

She's so lucky to have found her passion already.

That is beautiful. Let's hope she keeps that generous personality...

Sound of Music! Can Fiddler on the Roof be far behind?

That *is* the win, indeedy. Happy Bday to the Minnesota Scarlett.

Happy Birthday, Scarlett! And to help a friend is a wondrous way to celebrate. Your mama is proud.

Happy Birthday Scarlett!
So when do you move to NY or LA so that she can really sink her teeth into things?
The part about reading her resume being one of her her faved thing to do cracked me up, what a sweetheart.

I hope my daughter is as confident and caring as Scarlett when she's that age. By the way, Scarlett has awesome eyebrows!

"I just love reading my resume! It's my favorite thing to do."

I love her! Wow, she is one busy little actress! Break a leg, Scarlett!

Can I have her autograph now? Puh-leeze?

I'd be there! She sounds incredible! To watch her and (maybe?) meet you would be an absolute treat!

Wisconsin readers -- I am totally serious! Bring your kids to one of these shows and we can meet! Too fun!

shrink on the couch said...

Congrats to Scarlett for landing Marta! Sounds like the right combination of ambition and talent! Go girl!!

I wish that you had been my mother. I got to be in one REAL play and after that my mother's motto was always, "How ya gettin' there?"

You bet! Let us know when and where. Congratulations, Scarlett!

She's awesome. I just know I'm going to be watching her walk a red carpet some day on TV. Go Scarlett!

I kind of need your girl.

Just for a year or two.

Because I YUV her.

Hey, my mother-in-law's work is hung in the Phipps right now (opened last Friday night); I can't remember how long the show runs, but if you're there and poking around the gallery, look for Kirsten Johnson's stuff. Then say nice things.