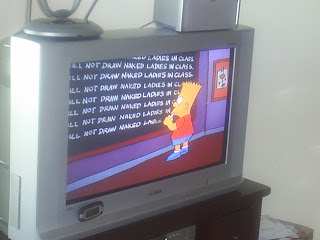 Before camp started, Stryker came to the Matron with this:

"Mom. If I want to do a project that means the whole family will have to stop everything and center our lives around me -- just like we did for Scarlett and her play -- and if that project has never ever been experienced in ALL of humanity before, and it's my heart's desire -- well, can I do that project?"

Now, the Matron had to give her son credit. That was one damn fine fully loaded statement, densely packed with Freudian pitfalls and with potential maternal missteps clearly drawn at every corner. One wrong move? Not only will dreams and pioneering spirit (she loved that 'ALL of humanity' element for its humility) be squashed by her evil self, but Stryker's Theme Song "Scarlett gets everything she wants and ALL the attention and I get nothing! Nothing" could be codified.

The Matron thought it best to simply smile and nod.

Stryker: "Do you want to know what it is? My project, my heart's desire, my unique and incredibly challenging dream?"

Stryker: "I'm going to take all the Simpson's episodes that we own and watch them straight until I've seen every last one. Get up early and watch Simpsons till I fall asleep. We can get junk food, in honor of Homer, and I can invite all my friends -- a drop-in sort of thing. Come over, eat crap and watch Simpsons, spend the night, whatever."

Instantly rendered Complete Idiot by relief that hazard materials (and her actual time-consuming participation) were not part of the equation, the Matron said, "Oh! Why, sure" and just as those words were out of her mouth, Reality picked up a bow and flung an arrow at the Matron, an unpleasant arrow, the kind that made her knees weak, mouth dry and head explode.

Stryker: "Oh my God. Mom! This is so awesome! I might just weep with joy!! Now I know what that means in a book, weeping with joy! I have never been happier in my entire life!!"

Here, he leaps and bounds, burning off some of that joy.

Matron: "Honey? We own a season or two of the shows, right? I mean, we're talking a day, maybe a sleepover?"

Stryker (Rage? Check. Ready. On Your Mark.): "Mom!! How could you not know? We have like 10 seasons. I think it's 80 hours of shows. By watching till I fall asleep I mean DROP asleep and then wake up as EARLY as possible. This is no party. It's an endurance test! We will barely sleep and stuff our faces with cheese curds!!"

You know the end of this story. 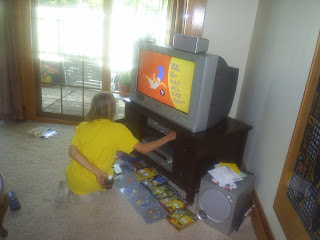 The Simpsonathon began today at 10 a.m. The marathon takes place in the third floor family room, an isolated spot with a bathroom (and right by Stryker's bedroom). As she types, there are two extra children in her house, boys brave enough to endure hardship, junk food, excessive TV, minimal sleep and her son's presence. They go home in the morning and tree different boys arrive in various shifts tomorrow.

Although the Simpsons has played in the background, nonstop, there have been board games, cards, Youtube, guitar playing, and various diversions. It's a mixture of performance art, video game and mosh pit, actually.

Stryker? He has not left the room. 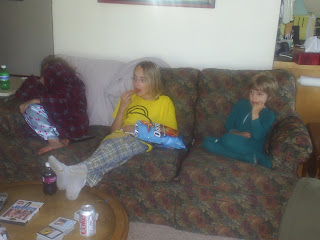 One thing the Matron considered when sticking to her 'yes': that part about no actual significant Matronly involvement. Caught! Guilty, guilty, guilty sings the Matron.

The thing she did not consider? Her other two children. Merrick has barely left that room, either. He's all about being Stryker.

OMG, it's a small world. My son decided to have a Lord of the Rings marathon tomorrow.

"Watch tv until your eyes bug out?Honey, that sounds like such fun. Too bad I'll miss it due to the other stuff I have to finish this week" would be my answer. I'm at work, they can drive dad nuts this evening and tomorrow evening.

I think you got off easy. Whew!

Great story! He cornered you before you had a chance to think it through. Good strategy.

I have tried to tell my 6-year-old that the Simpsons are grown up cartoons. She's skeptical that there is such a thing, but she's not watched. Yet.

You'll have to let us know if he makes it to the bitter end!

So funny. My 15 year old and his bff are in the midst of an "every single episode of Star Wars" marathon.

Good for you and for you son. Sounds like end of summer fun. I rarely sit and watch a whole episode, maybe I should come over. My favorite is Ralph "I sleep in a drawer" Wiggins.

Wonder how long Stryker has been planning this? It sounds perfectly executed on his end!

I once did a "Lonesome Dove" marathon. Kinda pales in comparison to 80 hours of "The Simpsons"! :)

I lurk a lot and very often don't know what to say, but just sort of amusedly read what you have to say. I did that again today and I think your kids have got your number.

Your kids just crack me up. Can I sign up in advance for an autographed copy of your book?

Very funny. I do not envy you the debriefing when the TV goes off later:)

It's okay. When Merrick is Stryker's age and all of Merrick's friends are just discovering the Simpsons, Merrick will be on to the newest thing. He will be a trend setter!