Template of a Tuesday

"Mom! I don't know what you're so upset about. Tricking your little brother into eating dog food is a time-honored American tradition, an inviolable right of the elder sibling."

By vocabulary or topic, you know which kid is talking! And tricking . . . and taxing the Matronly psyche before she had finished her morning coffee.

The younger set occupied one part of the Matronly brain, the older set, another.

These flowers popped a couple of days ago. 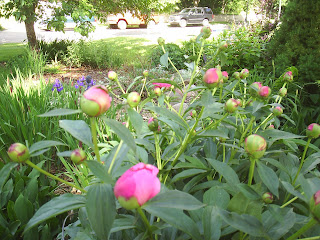 The Matron credits the woman who owned the house before she did: there are hundreds and hundreds of flowers! At the moment, peonies--throaty red, white, hot pink, pale beauties--radiate in about a dozen places.

At about 11 am, the Matron had the spontaneous and irrepressible urge to bring her mother-in-law an extravagant bouquet. Grandma Sophie loves peonies. Nothing compares to her passion for these gems! And the Matron--despite their many differences--adores Grandma Sophie.

Digression! The Matron's mother-in-law learned to tap dance in her sixties! Not long after she earned her college degree. How can you not love that?

The Matron collected an armful, a staggering array of peonies, the kind of bouquet that gets front row at the Oscars! There were more than 30 stems, so heavy the vase needed a seatbelt. She left the canine chef in charge and drove 20 minutes to the suburb where Grandma Sophie lives and rang the doorbell.

Was the Matron overcome when Grandma Sophie misted and choked at the sight of her daughter-in-law, at noon on a weekday and twenty miles from home, on her doorstep staggering with bounty? Not yet. It was when she walked into the living room and witnessed the bridge party--the girls.

This was a roomful of gray-haired very old, frail looking ladies. Sitting around the two card tables in Grandma Sophie's posh town-house, the eight women looked as much parked in a nursing home as in someone's house. There was at least one walker. The babies in the bunch were pushing 80.

And as the ladies all cooed and awed and declared the Matron one fine daughter-in-law--and as Grandma Sophie sniffed and misted -- the Matron turned to look at her beloved's mother, who was once as strong, sure, and steady as the Matron felt, and she saw for the first time in Grandma Sophie, this: a white-haired, old, frail and vulnerable woman.

She wanted to throw her arms around Sophie and say: "I will always be strong! I promise to surprise you with flowers and love and great-grandchildren! I will hold your hand, wipe your brow, let you live in someone's bedroom, drive you to the pharmacy and listen to the stories about way back when! Whatever you ask will never be a bother! I love you and promise this is not the last surprise I will offer, not the last act of love and never, ever, the last flower."

Instead she hugged her and just said: "I love you! Have a great party!"

And as she drove off, all misty-eyed herself, she thought of those roads ahead --for her own fine self and Grandma Sophie--and how one day, the Matron would be the gray one, sitting in that room, playing whatever hand she was dealt.
Posted by Minnesota Matron at 2:15 PM

What a nice story... Grandma Sophie is lucky that you thought to bring her your peonies. I love those flowers, even though all of my peonies have these little tiny ants in them...

This is beautiful and poignant. It's a casualty of our society that we don't appreciate people as they age. Every once in awhile, if we're lucky, we get a glimpse of ourselves later in life and realize those that come before us hold such value.

I cooked and chatted with my MIL the other day. Thankfully we both seem to have the kind that appreciate the DIL, not the jealous "you're taking my boy away from me" kind. Lovely story.

I too have children that have pulled the dog treat trick on their younger sister - devils.

Peonies are my absolute favorite and the story of your MIL was so sweet and made me realize I'm not that great of a DIL - I would never have thought of that!

I've lived through the aging and death of my mother and her two older sisters. Thankfully my M-I-L is quite a bit younger. We have a great relationship and I cherish her.

By the way, peonies are beautiful and my children have eaten dry cat food by choice, not coercion.

Sign me up for the posh townhouse, independence and kind daughter-in-law.

I can't bear the thought of my very physically active Mother in law getting to the frail stage. We saw them last weekend, and the slow down is visible - and I hate it - being a control freak, I like to be able to fix everything - I can't do anything about this!

I love peonies too - have you tried Chinese Tree Peonies - they have the most enormous blooms - the size of dinner plates, and look like fabulous hats!

That's just a fine piece of writing. Thank you for sharing this day.

That made me teary. How wonderful that you can pop over with flowers. The distance prevents us from seeing our folks but once a year or two and I struck everytime with the changes in persob that aren't reflected in their voices over the phone.

Damn you, woman, now I'm sniffing and misting, too!

Grandma Sophie is lucky to have you. (Psst, I love peonies, too. I'll email you my address. Okay, no I won't. I promise.)

And that last line was perfection.

Dog food is probably healthier than most people food these days. :P

You slayed me with this one!

I think in my case my older sister fed me cat food. wet cat food.

I adore you for doing that.

There is gorgeousness in this story. I'm coming to similar realizations in the last few years, as I watch my in-laws deal with the decline of their own parents.