Why Is This Animal Still Alive? And More. 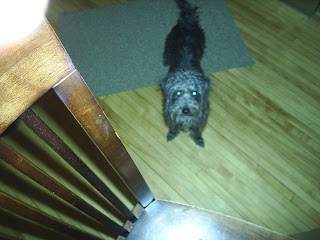 The Matron really wonders where that hit man might be.

Scruffy made his usual round of pooping through the house: third floor, kitchen, Scarlett's room. He has a regular junket.

He ate a box of pink Marshmallow Peeps.

He jumped the fence three times, ran into the road and still didn't manage to get killed.

He ate half a Subway sandwich: bacon, mayo, cheese.

He ate a giant-size box of Bottle Caps.

This combination made his little heart pace. He shook--all that sugar coursing through those 14 tiny pounds.

And when the Matron's stone cold heart melted at his suffering and she picked him up and put him in her lap?

That dog peed on her. A lot.

Her day, generally, has been a real hum-dinger.

See this? This is called Winter. 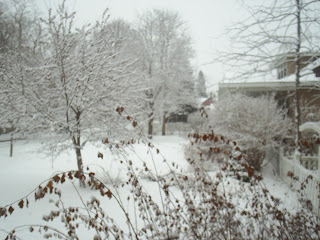 Matron: "The new season is Spring, sister. We get grass and blue sky. Tulips."

Mother Nature: "Did that dog just pee on you?" 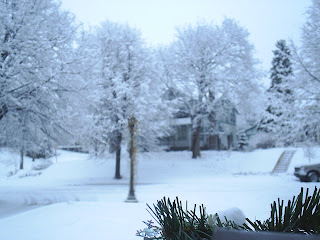 It is pretty but the Matron has seen this show before and she's ready for new runs of sunlight and mud.

Still, the Matron was buoyed by all the wonderful comments regarding the Other Mother. She feels, well, better. More solid in her sensible shoes.

Tomorrow, the Matron takes her weasel across the river to Minneapolis to audition for The Lion, The Witch and the Wardrobe at the highly competitive Children's Theater. She will remember her duel with the Other Mother and read her book, quietly.

At high-octane places, it is best not to converse with the women who gave birth to the competition.

This, below, is something the Matron lovingly refers to as glop. 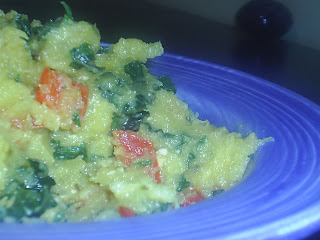 It is her version of grits, mashed potatoes, beefy lasagna, of fill-the-belly comfort food. This is baked squash with kelp, peppers, tomato, spinach, blue cheese and tahini mixed in. The Matron just loves the stuff.

The glop sat unprotected, exposed, within inches of the shuddering, shaking Scruffy who just turned his nose.

Stryker: "Even Scruffy has limits."

Did you hear that?

The wine's uncorking.
Posted by Minnesota Matron at 3:43 PM

Maybe you should build him a really nice DOGHOUSE!

Lol, you slay me.
At least you still have your sense of humour about it all!!
Goodluck Scarlett!

No good luck--break a leg!

I think I'd choose the beefy lasagna, myself.

I predict that tomorrow you'll be picking up pink piles of pooh.

Bless you. I think the peeing incident - if all that had happened to me yesterday while I was in a mood anyway - well the peeing might have caused me to take a little ride to the POUND to give them a nice little yappy Easter present.

Oh you are too, too kind to that beast!
Your glop sounds kind of good, actually.

Scruffy would have "disappeared" from our house a long time ago. Once again break a leg Scarlett!

Girl, I would be uncorking the bank account and getting myself to the Teardrop Lounge for a martini bender...

You are one hearty individual, dealing with naughty dogs and nasty stage moms. I raise my glass(es) to you :)

I thought we were the only thoughtless family that daydreamed about sending their dog out to play in traffic...and your blog is eating my *day*! Love it.