The Matron Must Hire a Hit Man

Please do not misunderstand. The Matron allows spiders to procreate in her kitchen. She will sidestep a bug.

She loves dogs! She considers herself a Dog Person. For nearly 15 years, she doted on this one: 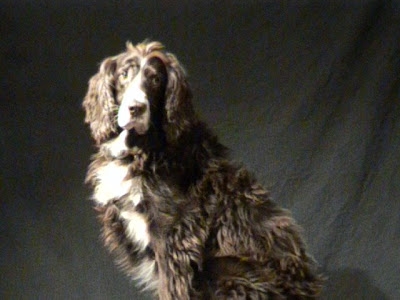 Thurston had issues. Primarily, he had an amazing eating disorder: he ate everything.

One steaming July day, this dog ate 64 balloons waiting to be filled with water for a child's birthday party. The Matron--with a baby plastered to her breast and a yard full of children--wrenched these iron jaws open to pour hydrogen peroxide down the resisting throat.

Three doses of peroxide and ten gallons of Matronly sweat later, he did. Red, yellow, blue, purple and green--they all came up.

Eva was beside herself with pleasure. "Oh, Mary! This is so much better than daycare!"

Thurston's poop was always informational. So that's where the Polly Pocket went! That's what happened to the crayons! Here's the key!

And when Thurston's 14 year old body failed him and he needed hand-feeding and diapering, the Matron took on these tasks without hesitation.

What a good person that Matron is!

Now that Thurston is gone, it is this boy's turn to go through the geriatric shuffle: 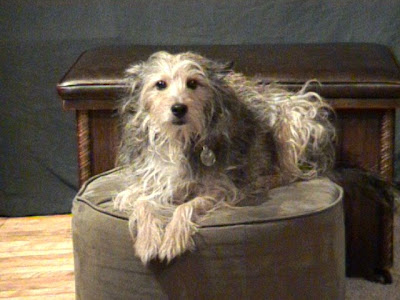 The Matron hopes that her children are watching how she tends to old age, even if it is of the canine variation. She would like equal treatment.

Pee just falls from Jekyll. He can't help it. You can scream in his ear: "Don't pee in the house!" And it won't matter, not because he doesn't understand but because he cannot hear you.

He is so blind that one must point his snout in direction of his food and shove him out the open door (which he doesn't notice).

Mostly, he is spending his 15th year sleeping on the most expensive chair in the house.

How patient is the Matron!

Reader, she is asking you to forgive her single shortcoming, her sole murderous impulse. Here is the current bane of the Matronly existence: 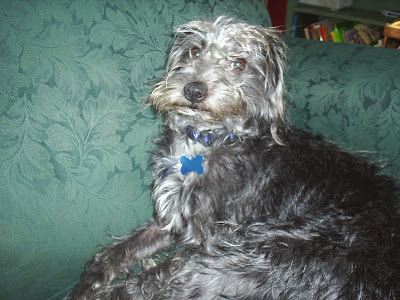 This dog weighs 14 pounds. According to the Matron's estimation, he produces twice his body weight in poop, daily--inside the house!

This dog's official food is one half cup of dry nugget. The Matron is unclear where he gets the fuel for such copious discharge.

Pee on the upstairs carpet (Jekyll doesn't do stairs so she knows who to blame!)

Poop in the basement.

Poop in the dining room.

Poop in the hallway.

This dog, Scruffy, is a recent acquisition. The children love Satan's Familiar beyond reason. Scruffy loves to be carried. He wears cute sweaters. He sleeps under the covers. He plays fetch.

Recently, the Matron treated herself to lunch with a friend.

The Matron hesitated with the hydrogen peroxide. She picked up the bottle. Debated. She looked that dog straight in the eye.

And decided to let nature take its course.

Her last hope is the backyard fence. Scruffy can jump four feet high. He wriggles out underneath the slightest gap. He's Houdini.

The Matron is constantly seeing the dog halfway down the alley. She mumbles: "Scruffy, come here. Scruffy."

Once he was gone nearly an hour. Then those children! They noticed! Resigned, the Matron feigned alarm.

After all, he has work to do! There's unmarked territory in that house. Fresh planks requiring poop. Corners to mark and shoes to destroy, carpet to ruin.

The Matron's hatred for this dog disturbs her children. "How can you not love him?" they whimper, fearing a similar fate.

So she tries to smile in his fetid direction. She forces herself to pat the Scruffy head and has stopped the random kick.

Still. She plots. She's keeping all options, open.
Posted by Minnesota Matron at 9:42 AM

You are a Saint with a special place in heaven. What we do for our children goes beyond anything we could have imagined.

I hate to tell you this, but my best friend had the same feelings toward a certain family cat.....daily she prayed that cat would die......and it eventually did, at the ripe old age of 25, many years after all her children had left the house.

I'll pray you don't have to wait that long.

*He is kinda cute though, sorry*

I feel for you. I save worms from the wet streets, yet I sometimes want to put my fist through one of my pet's heads. Love/hate for sure.

Our Gilby eats every thing too, he has very colourful poop :-)

The matron tells a great tale about tails.

That was dumb. Sorry.

Great post. I LOL and I NEEDED a LOL!

No Cheri -- that was funny!

Tee hee hee! You with the dog poop and me with the cat barfing up hairballs. Good times.

Even my daughter once asked when she got home from school: "Is the cat dead yet?"

(To be fair she wants a dog and I said not until the cat's dead.)

Loved this post and I have that same devotion to my five animals.God you gotta love them.

You are a far, far better woman than I.

how old is scruffy? sounds like you could put him with Riley and they could really do some damage...

Mary, this is so funny - your stories just crack me up.

Before we had our Edmun, I didn't understand people like you being so devoted to their dogs... now I do.

Oh, Mary, I hate that dog now, too. Of course, any animal that defecates in my house is quite literally on my shit list.

In our house it is not the dog but the cat who is to blame. She is, as my husband likes to say in an immensely sarcastic voice, "a sensitive cat". Cat puke almost daily. Yet she still eats anything green she can find (to which she has allergies and gets hot spots. Do not ask me how much it cost to find out the sores were from allergies). Self-destructive twit.

Thanks for coming by the blog. I'm having fun reading your back posts ....

While the subject may not be "happy", the post was delightful. Poor puppies!! But I must say I love the names you have had for your darlings!

Oh, I'm laughing. I have the same feelings about our dog. Though the poo, for the most part, lands outside. Which is also where you can find half of the underwear we used to own.

That pic of Thurston is divine.

I love our lab to pieces, and he can't control his shedding, but sometimes, as I vacuum, I wonder, "How much longer?"

Hah, this made me laugh out loud, surely you must get rid of such an obnoxious dog who is ruining your carpets. Alas, how to get rid of him?

I suppose he can't go to the Humane Society, because what would you say? He is not house broken and that is why I don't want him?

Maybe you can just leave the back gate open and he will keep wandering away from home in ever increasingly larger circles.

One day he won't find his way home, you hope.

Nice post! Thanks for stopping by my blog. I will be back@ =)

dear sweet gentle MM:
our gorgy fluffy feline,
Lucy-The-Outside-Cat
has just been popped into a courier box and is on her merry way to come hang with Thurston.
you're gonna love her
mwah X

Mine will eat anything too but she hasn't resorted to pooping in the house. Yet.

I'm dealing with an aging dog, too. Sad, isn't it? Fortunately, he's not at that "pooping" stage. I don't know how you manage with that. Don't know if I could. Kudos to you!

It's good to know that I'm not alone, although now some of you have my heartfelt pity. We can share the hit man, especially for that cat. Sorry, KateKiwi!

Oh my gosh. I love your blog.

And I'm so glad you visited my mine because how else would I know about yours,
but......Ummmmmm.....how do I put this delicately?

Please don't ever come back to my blog.

But you are an EXCELLENT writer and I will forever be self- conscious every time I post. Oh my gosh - did I spell "conscious" wrong?

This post reminds me of why I started coming over here and have kept coming back. You are dog's best friend. You're a loyal soul.

It's nice knowing that animals other than cats regularly barf...in fact, I'm feeling much better now about my own bulimic kitty...

I'll see your two dogs and raise you four dogs,four cats and four birds..Come on sister ante up!(We can use poop..God knows we have plenty of it)..LOL!!

You are a really good person. You deserve some really big karma points for all that you've done for your animals.

Oh, sweet Matron ... I, too, spent years wondering how in the world Foxie Doxie wormed his pooping, peeing, shedding, not listening self into my house. I've finally stopped wishing him ill ... most of the time. Thanks for the funny story and for letting me know I'm not alone in the love/hate dog world.

I've just leaned over to my 6 year old Golden, who is afraid of EVERYTHING - including our cats, storms, a wavering leaf - and demands to be held when any of these things frighten her, and given her a big smooch and hug for being such a wonderful dog.