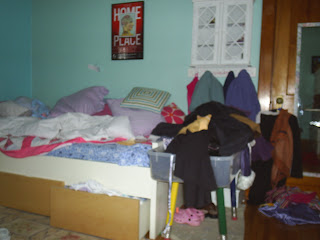 The Matron has written about this affliction, here.

In short, she suffers from Incurable Clutter Brain Suck. She cannot tolerate clutter

If in a pile of snow pants, Spider Man sunglasses, math notebooks, boots, ballet slippers, police matchbox cars, Game boys, Little House on the Prairie books and Dominos, the Matronly brain itself becomes such detritus. She is unable to focus. To move forward. To commandeer the crew, as it is.

And the Matron has mentioned that debris just flies off of Scarlett. Pig-Pen is not a cartoon character. No, he had transgender surgery and is now living in her house.

This is a shelf in the Matron's bedroom. 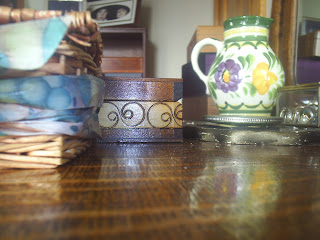 This is one in Scarlett's. 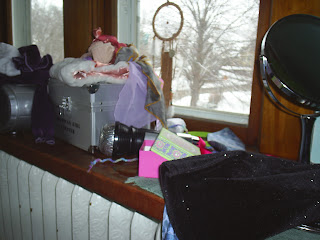 The aerial view, to appreciate density and depth. 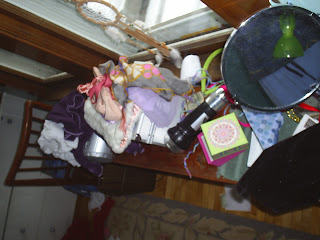 Another peek? (know that the Matron relies on ancient series of yogic breaths just in order to post these) 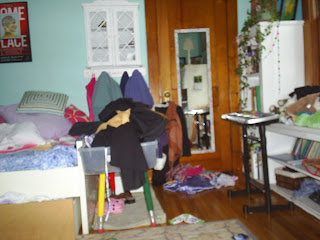 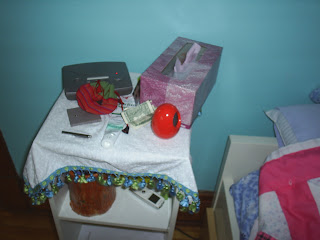 She can be home just under five minutes and this will appear on the floor. 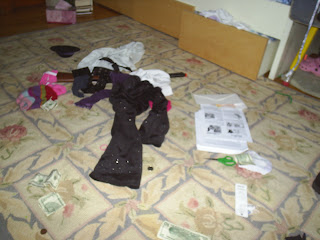 As said before, the Matron and Scarlett have had some dark Freudian battles over this room. Trusting in the time-honored power of Total Deception, the Matron developed a habit of spending a few speedy minutes in Scarlett's room every single day in order to keep bugs, rodents and her own psychological dissolution at bay.

If she missed a day, it became difficult to open the door.

Last night, as costumes from Scarlett's Private Backyard Theater Company filled the entire floor and props filtered out into the hallway, the Matron could no stop herself: she picked stuff up -- while Scarlett was in the house.

Post-hysteria --and I mean this morning because this is a child who made a conscious decision to stop pooping at 3 and went 27 days (and then did it again) AND who once belly-crawled to the car in protest over life's ambulatory requirements --- so this morning we had some semblance of a conversation in which Scarlett stuck to her assertion that her room was just that, hers.

And the Matron held forth that certain standards of hygiene and decency must be enforced. She's willing to concede the clutter. To a point. She believes that a parent should be able to enter the room without being bitten by wildlife.

Scarlett firmly disagrees. In fact, she has declared the Matron to be persona non grata.

So. That Matron? She is backing off. Not because that's the right thing to do -- encouraging autonomy in her child, developing trust or anything that sane.

No, she's banking that one day Scarlett forgets and Total Deception can start all over again.
Posted by Minnesota Matron at 12:33 PM

I know this battle all too well. The living room is directly beneath X's room, and I live with a fear that I will be crushed when the ceiling finally gives.

Priceless. The battle between mothers and daughters over this (or a myriad of other things) is just timeless. My mother and I had a fight over applesauce. When I was a full grown adult. Truly. It's all about territory. Enjoy.

I'm a clutterer too...so I feel for Scarlette. But I also have the clutter brain suck problem too.

Send her to grandma Mary's for a week.

oh bless her heart. she's a hoarder! as am i. it drives my husband crazy. and i try very, very, very hard not to create piles of stuff all over the house on every available surface. but i do.

My artistic girl doesn't give a fig about cleaniness - I was the kid too.

I try to help her manage her clutter, from a distance, occasionally poking my head in.

But she's in the brink of writing off my good advice, so I pick my battles carefully.

You are so wise, the way you handle it.

I say stay out and when the day comes that she can't find something that she needs, she'll understand. Like, her clothes. Don't do her laundry siting that you refuse to go in her room. And if she decides to do the laundry herself then that's just gravy.

**disclaimer: of course I have no idea what chores she already does so this whole comment may be moot**

It's your house. End of story. And if she doesn't want you in her room, then she should keep it decent. As in, floor clear, dresser top clear, bed made (and clear), and no food whatsoever allowed!

It will never be perfect (believe me) - but she is capable of some basic standards.

You can sneak in while she is at rehearsals to tidy the closets.

Your Scarlett, my Social Butterfly? Kindred spirits in the stubbornness department. Fortunately for my anti-clutter soul, SB and I are on the same page.

Okay - The practical on the earth Matron LOVED SuburbanCorrespondent's solution. The other part? Sh8un. Send her to Grandma Mary's.

I think suburbancorrespondent is absolutely right, you have to do what is right for you, it is your house. Having said that, I didn't go in my daughters' rooms if they were a sty, and even so they were required to keep a path cleared from the bed to the door -- in case of fire or other ER, I didn't want to kill myself getting to them. Otherwise, I stayed out of the room. They washed their own clothes. They were not allowed to take in food. The end result? My oldest daughter's apartment is as neat as a pin.

So...this is what I have to look forward to. Lovely. You seem to be handling it well...

Loved the story about Scarlett refusing to be ambulatory on the way outside to the car. Easy to picture.

That adorable baby picture of your little guy about to turn five is to die for!

Your patience is really amazing. I'm all about deception--I'm the mom who told her sons that "McDonald's is out of french fries, so we can't even go there today to get a Happy Meal." Instead of a plain "No?" Yeah, sometimes...

Will admit now that, I have been a "collector of things" from a very young age. I remember the exact same arguments with my own mom...I learned, at an early age, the phrase "organized confusion" as I can find absolutely anything you want or need.
I've gotten better over the years...but...(as I glance over at the piles of books, papers, and whatnot on my floor)...yeah...give Scarlett my best.
(And really...has Grandma seen that room?!?!)

I hope "one day" is not too far away... I face this with my son. Too bad you got caught!

Mmmm, has my girl been staying with you?
- it looks just like her bedroom floor here!

It makes me TWITCH, and I'm pretty laid back about tidyness!

I try very hard not to look, but when I go in to say goodnight I can guarantee leaving with something imbedded in my foot.

ROCK ON! Matron! Total Deception in the management of offspring, is one of the approved Jedi arts, a precept of the Buddha and often mentioned in the little known writings of child psychologist Boy George!
You are in very good company!
And Very F-ing Funny!

Oh, I do not look forward to these battles when my kids get older.
I think my solution might be to close the door and walk slowly away. Out of sight, out of mind?

Hi! My name is Peggy and I'm a Neat Freak..(mumbles from the crowd..REALLY? We sure couldn't tell by looking at your house..)OH Hi Peggy!

My boys have done me in and I gave up. My stuff is neat and their stuff?..Is not. ;p

I have a son who is a h.s. senior. He gets dressed in the laundry room next to his basket because his room is a natural disaster. He's going to college and the army next year. My house will be cleaner but boy will I miss him.

I consider myself a neat freak but they have beaten me into submission. Hand marks smudge my windows and mirrors. I'm just happy if the place is tidy and I don't step or sit on things.

I know this comment is sooo past your posting's prime, but just can't help myself.

I have a clutter bug myself. I tell her it isn't about being a neat-freak, it is about being a good steward of what we have.... you want me to buy you clothes, but I am observing that you are not taking care of the clothes I bought you, so what is my motivation? I tell her, "I am watching you to see if you are a good steward of that which I have given you... clothes and such. If I see you are a good steward, I am happy to give you more, because I know you won't squander it. If I see you are a bad steward, I will not get you what you want because it is a waste of my money." Same goes for the room. AND I am trying to teach her that one cleans one room/house before one invites guests over, so she must clean her room if she wants a friend to visit.

I always encourage her by letting her know that when she is 18, she can get a job and pay for her own rent/car/food/clothes, and of course, do what she wants with them.