Which One of These Things Is Not Like the Other?

Even the Matron has her limits. When the wind chill is deemed dangerous and the temperature decidedly post-zero, she skips the run and sleeps in. Well. Till 7:00. The children don't have to be at school until 9:10. That's a lot of time--an expanse. Oceanic. Plenty of room for basic hygiene, breakfast, and the backpack shuffle. Why, we could even proceed at a leisurely pace, with room for decorum and pleasantries!

Except for socks. And tags, seams, jackets, gloves and hats. Which we don't need when the view from my office beckons and sings. 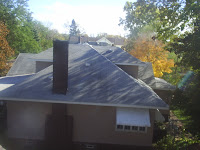 What a difference a few dozen degrees make. One cannot go naked into storm and ice. Unless you are four years old--nearly five--and cannot tolerate texture of any kind. 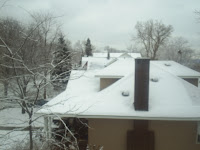 Merrick spent a solid 45 minutes on just one aspect of a full-fledged onslaught against Material That Might Touch My Skin. After much anguish, he finally selected the least evil-looking socks in his drawer. And there was much evil to sort through and fear. He held up offending pair after pair, edifying the matron on the dangers therein.

Then he sloooowly put on a sock. He attempted to identify the precise angle at which the seam touched his toe and sparked unendurable agony. Took off the sock to meticulously cut just the right amount of seam away. Holes will also kill so he must be exact. Then he put the sock back on. Peered at his foot, took one ginger step and grimaced before removing the sock and returning to the scissors.

His look of genuine relief when the job's done is the only thing that keeps me from screaming and throwing myself down the stairs (most days).

Merrick spent most of the summer naked. Once he played fire man in the front yard, wielding the garden hose while wearing just big black boots and a fire hat. Our neighbor, Q, who happens to be gay, called out from his kitchen window: "Where can I get one of those outfits?"

In A Mind Apart: Travels in Neurodiversity, Susanne Antonetta says we're all just sailing together on the same neurological spectrum and many of us--organically and without diagnosis--exhibit traits that, in other people, become part of autism or bipolar disorder or anything other set of neurological traits to which we've been given a label.

When I read about autistic children ripping off their clothes in sensory horror, I see Merrick.

After the socks had been defeated, he still had a tag on his shirt to cut. To no avail. The sleeve emerged, insidious: the thing wrapped around his arm like a clamp. More tags and shirts and eventually we worked our way through the coat. Sweat and tears were flowing and from more than two people in the house. As the minutes ticked and Merrick's pace continued, tedious and thick, hysteria grew in the older children: "We're going to be late for school!"

This was my guy on his first day of preschool in September, the pensive one in stripes. Note how perfectly those shorts stream from the waistband. Those are singular pants and none other will do. Ever. 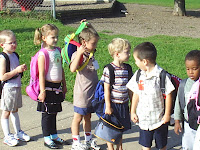 The darkest moment of the day came when Merrick realized that his beloved gloves and hat--the team that not only didn't offend, but delighted and soothed--were still lost. As in maybe forever, now that it's been a week. Of course, the matron purchased replacements and pulled fuzzy possibilities out of storage. That wreckage now sits in a bag, radiating danger.

He cried all the way to school over what he lost and that wasn't just the gloves. Largely, the entire family was patient and kind. But there were also darts of impatience, a push toward the hurry-up, rolled eyebrows and irritation. Stryker and Scarlett--at 11 and 9--struggle to tolerate dawdle and delay in general, and are baffled and annoyed in the face of their brother's sensory dilemma.

So the matron has more reasons than the rest to pine for summer (although at -10 this morning, the entire state had plenty). She longs for the day without schedule, the Thursday morning that Merrick can claim victory over all those seams and snaps that torment and run naked into the backyard, a fireman or sheriff or superhero. She considers her many home or unschooling friends, whose children dive into their intellectual days wearing anything they please -- or not.

She thinks that tonight--when she retires, long after the children have been asleep--she will carry her exhausted, coughy, sniffly and spent little guy into the parental bed so he can do what he loves best: sleep with a handful of his mama's hair in his hand.

Posted by Minnesota Matron at 8:42 AM

Oh, that poor baby. And poor you. Have you tried turning all socks inside out? Sometimes it works. I remember sitting on my 4-year-old and forcing shorts and T-shirt on him when it turned hot, because he refused to transition from winter clothes and I was afraid to take him outside in case someone saw him and called Child Protective Services. He's okay now.

You should move to Hawaii - shorts, T-shirts, sandals all year round (or, if you prefer, fireman hat and boots).

Oh dear. I have a friend whose kid was diagnosed with a sensory disorder and need occupational therapy. My heart goes out to both of you and your little boys.

What a sweetheart - such tough times for a little guy.
Bless you both.

You are an awesome writer. I just stumbled on your blog and have put it in my favorites. I lived in Minnesota for 20 years (grew up there) and used to feel so sorry for those poor people in Florida who didn't have snow at Christmas. I didn't know that one could go for an entire year without having one's toes so freezing cold that they HURT. There are definite advantages to living in warmer parts of the country. However - Minnesotans are STRONG and folks in the south are super wimps!

Good luck with all the winter stuff!

Thanks, Former Maiden! It's good to hear people like my writing. I LOVE to read and write, inconveniently preferring those two activities to all else.