This guy is nearly 15 years old. His name, which suits, is Jekyll, as in Hyde. We rescued him from the woman who rescued him first. She found him under a bridge, tossed like somebody's garbage. He had a broken rib, fleas, minimal hair and Attitude awarded those with small parts and big egos. 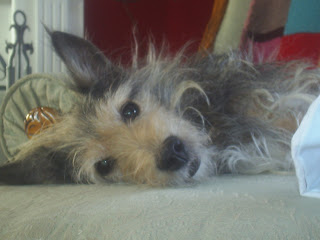 But we saved him from her, too. She put an ad in the paper. When we answered, we discovered that she had over 300 house mates: rabbits. There were cardboard dividers throughout the house, creating little running zones for the bunnies, who freely dropped their tiny stinky business every which way and that. Dander, it did fly. The matron, then a buxom lass, did notice the asthma inhaler and cigarettes on the counter.

So we fell in love with the scrappy, yappy, stinky skinny terrier mutt -- and brought him home. Our first dog, Thurston was just a few months old and when we introduced the brothers, it was puppy love. Now Thurston is gone.

And Jekyll is the newest (actually only--John and I have a few good years left) geriatric case in the house, the one in need of diapers. When we wake him up in the morning (he is deaf and blind and needs a good shaking), he just stands up and pee falls from him.

If it's cold -- oh wait, we live in Minnesota -- I mean: Every day he puts his tiny snout out the back door, juts back in and poops.

Our other dog was so old and so worn when he died that people stopped saying hello when they came to our house. They said, "Oh My God. Isn't that poor thing dead yet?"

So we know the road ahead, well. But this guy is far from suffering. He is simply wildly inconvenient and messy. Not my euthanasia material. At least in my book (I know friends who have killed their pets for peeing: not me).

Besides, if Jekyll wasn't around, who would the new puppy torment? 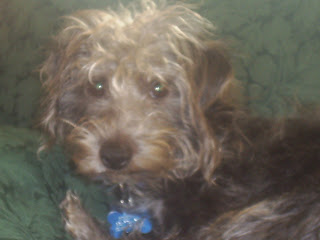 Posted by Minnesota Matron at 6:07 PM

Type (little) a aka Michele said...

"Oh My God. Isn't that poor thing dead yet?"

I actually laughed out loud at that. I'm sick.

Aww. He really does look like a Jekyll, too. You are the sort of dog owner I would want to be, were I ever to be a dog owner, which is why I choose not to be a dog owner. It makes sense if you're me.

But then, the snake and the hamster turned out to be more commitment than I was expecting. I really shouldn't be trusted with anything more extravagant than a beta fish.

I'm not quite sure whether to laugh or cry...

Came over from the Derfad Manor. You have a heart of gold - and I understand - we love our dogs too.

What a handsome devil. He and my Geriatric Poodle would be fast friends. My heart goes out to you on the firm shaking to get him to wake up - there's always a tiny part of me that wonders if this is the morning that he doesn't wake up. Here's to loyal friends who are good to the last drop ... no peeing pun intended.

Last week we spent over $700 to take our sick cat to the emergency vet clinic where he was diagnosed with severe bladder infection/blockage and spent the night, was on IV's etc. If I'd have known the cost ... I still would have done it. Pets really are family members.

Jekyll really is a scruffy character - but that last picture of him is really cute.

(By the way, after the bloody gerbil brawl a few days ago, I announced right away, sorry - no going to the emergency vet clinic!!)