Taking Herself in Hand

Every so often, the Matron goes on a bender. A health bender, that is. These sprints toward self-improvement -- of body and spirit, generally -- tended to be just that: sprints.
At your mark, get set: go!
The Matron would start off strong (no yeast, no sugar, no alcohol, pilates, macrobiotics, ayurveda living, cleansing breathing regime, creative visualization, weight-lifting), proceed with laser-like focus and determination and then peter out after a short distance.
Ah. If only she could be more of a cross-country or marathon self-help aficionado. She'd still be selecting food amenable to the Type A blood streaming through her veins. 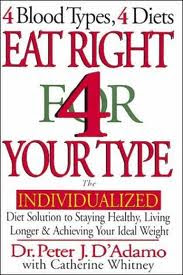 Or harder yet, eating fermented vegetables with a side of sea weed (thanks macrobiotics for the good health but less than palatable plate).
The latest?
The Body Ecology Diet!
Now, the Matron is a student of history. She understands that the current focus on kefir, ghee, alkaline and acidic, expanding and contracting, colon care, liver cleansing and emotional healing will most likely fall to the wayside like the whole weight lifting concept. But for the moment, she in the thick of the sprint.
This isn't really a diet but a life plan, which is what appeals to the self-help junkie she houses. One attends not only to every body part and organ, but the emotional needs of body and soul. There are recommendation for relaxation, exercise, spiritual growth. There's even a war theme and yours truly likes action-adventure shows: fight that yeast!
She loves it! She's a virtual full-length feature film between getting in touch with feelings, the battle toward health (hard-fought, indeed, with lots of subplots like spleen health and gleaming skin) and new approach to life.
This time around, she is thinking in terms of a mid-range run. Maybe six weeks?
And those apples that don't fall far from the tree?
Scarlett: "I'm a vegetarian."
Until someone produces a drumstick.
He Who Cannot Be Named when confronted with a carrot: "I don't eat orange things. Except cheetos, doritos, and various other chemicals constituted into junk food or candy."
Merrick: "I'm going to exewsize!" In front of the TV.
At least hope and ambition spring eternal and even produce change of some sorts, if temporary.
Others gone full-throttle into some sort of health program that fizzled or failed? She knows she's not alone.
Posted by Minnesota Matron at 7:45 PM 2 comments: 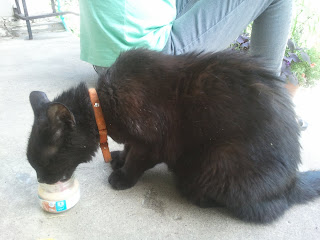 No, not the hour although that is rapidly approaching.
Midnight is Merrick's name for the tiny, completely domesticated, friendly and hungry (and possibly pregnant) black cat who appeared at the Matronly door on Monday.
Initially, the cat's presence was innocuous. Innocent and uneventful.
Merrick: "Mom! There's a cat on our porch!! She's hungry -- can I give her some food?"

In a moment of complete insanity, the Matron handed Merrick a can of tuna, a bowl of milk and some leftover salmon. That cat immediately took up camp. She spread out on the porch, cuddled in laps, purred, and meowed her way indoors.
Because John is deathly allergic to cats, the indoor avenue didn't work.
The intrepid Merrick build a house for Midnight -- cat's new name -- in the backyard. He hooked up a hose for water and pondered electricity. Blankets and food abounded. Midnight purred on, oblivious to the human effort but contently basking in all the comforts of home -- her new home.
Then she disappeared.
Merrick: "MIDNIGHT IS GONE!! WHEWE IS SHE?"
That child roamed the neighborhood with a flashlight (even thought it was noon), looking for his new friend. He begged for "lost cat" flyers, fretted about her potential demise or worse yet, hunger pangs. Hours of energy were invested. The Matron was struck by his dedication and concern for a lost wee one. He went to bed with all the windows open, hoping for a meow, some sign that she'd returned to his care.
The Matron considered setting a trap (with sharp things involved) but didn't mention that.
Finally, Midnight returned. She cuddled into her backyard perch without a beat, meowing expectantly for her milk and expensive canned food. Merrick immediately obliged.
Now, the Matron has been already danced the Stray Cat tango, complete with birthing and baby kittens. She's not prone to repeat disaster.
But when Merrick slogged in after an hour of caring for Midnight, smelling slightly of salmon, milk, and cat? He turned to his Mama with damp eyes and said: "I LOVE that cat."
Sigh.
Guess who found a new home?
Unless you want her . . .
Posted by Minnesota Matron at 9:29 PM 8 comments:

Ah, July 4.
A time to review history, perhaps? Browse through the constitution, memorize a poem about George Washington or study the first tea party?
No.
It appears July 4 currently constitutes four days of nonstop fireworks, alcohol -- and shopping. Fourth of July sales abound. Indeed, the venerable Matron opened the newspaper this morning to discover that EVERY STORE IN AMERICA was having a sale. And they were all open, all day.
So now you can pound a beer, gobble a brat, light some juice and then spend money! Just don't try that history thing and you'll be fine.
Predictably, the Matron was pooh-poohing this, considering herself above the fray in all its aspects. Now, the fray lives in her very own neighborhood, which is situated on a beautiful bluff high above the Mississippi river. The panoramic view of urban fireworks brings thousands -- thousands -- of revelers to pee on people's front lawns, throw garbage around, light illegal fireworks, drink beer and, finally, watch the city's fireworks.
The Matron smugly stays home.
Yet . . . .
He Who Cannot Be Named (HWCBN): "Mom? I'd like to sell bottled water and juice on the bluff tonight. Bet I make a killing."
And he did. HWCBN took a wagon full of bottled water, juice boxes, change, signage and his little brother to the drunken masses and sold them water. While they sold all their ware, they also got several requests for beer. Which they did not have.
The Matron is still pondering what breed of adults would ask a 15 year old and 8 year old if they were selling alcohol.
Now, shortly before departure, HWCBN got an idea for a second, side money making venture along the bluff. Merrick, adorable as all get out with mish-mashed front teeth (you know that adorable phase where the big ones are half in?) and precious second grade posture, could play the violin! With his case out -- for money.
The kicker? He played "Go Tell Aunt Rhody" with lit sparklers attached to the bow (video on youtube soon).
At the end of the night, their hourly wage beat the Matron's. And her children fit right into the fray: crass commercialism and inappropriate play with fire. She's just doing her patriotic duty as a parent.
Posted by Minnesota Matron at 9:40 PM 6 comments:

Summer in Minnesota!
This was June: Monday, fifty-five degrees. Tuesday? Seventy-five. Then rain. The next day, ninety and humid. The Matron practically pulled out an entire department store in order to clothe her family for the cyclonic shift in temperatures (and temperaments, but that's another story).
Children? More demanding than the weather, mostly because they have been Underfoot.
Here is the Matron, mopping the kitchen floor while creating the week's grocery list and pondering the meaning of life and wondering where the soul goes (if there is one) after death and fretting because she hasn't checked email in a week and wondering if the fifteen students who need attention over the summer really mind waiting another month or maybe (hopefully) they've forgotten those incompletes?
So, she's busy. Of course, 99% of this multi-tasking is in her mind, but still. She' sweating (that floor, after all).
Merrick: "Mom? Have you seen my set of owange dice and the fake fouw leaf clovew?"
Matron: "No. When was the last time you saw them?"

Merrick: "Chwistmas? But now I need them NOW. Can you find them?"
Clearly, this child did not read minds because if he did, he'd notice that his mother was in the midst of FINDING the answer to the meaning of (her) life, had just completed the grocery list and had given up on souls. If that wasn't being busy enough, what about the hands-and-knees mopping dance she was currently doing?

Matron: "They're too tiny. I'm in the middle of mopping."
Merrick: "I need them NOW!"
Matron: " Why don't you put out a magnet and see if they just miraculously toddle out of some corner and head to the magnet?"
Merrick: "Weally?"
Matron: "Really."
And when he zipped off in hot pursuit of a magnet ("Mom? Whewe's the magnets?"), the Matron was acutely aware that parenting dipped to a new low. Multiply this scene times two thousand and there was a week in her life during June.
So she took a nap. For six weeks.
Now that the urge to encourage 8-year-olds to play with matches has dissipated, the Matron is able to clear the foggy brain and return to all things prose and, possibly, better parenting. All three children are still alive and Satan's Familiar continues to terrorize. Something never change and some return, different.
She's back!
Posted by Minnesota Matron at 9:02 PM 10 comments: