Why the Matron Loves Women, Again 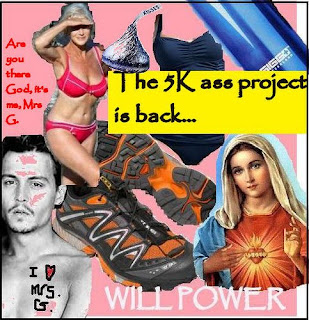 The Matron assumes most of her readers lounge and chuckle over at Derfwad Manor. If you don't, heaven have mercy, and run on over. The Matron just adores Mrs. G! She's certain if they were backyard neighbors, there would be mood-altering drink and the daily recitation of insecurities and failures and other topics close to the middle-aged female heart.

So Mrs. G. has launched the '08 Ass Project, a communal call for physical self-improvement. Mrs. G is planning a diminishing hinterland and will post a picture of said buttock (clothed, Johnny) every Wednesday. Being Mrs. G, she invited everyone to photograph their own evolving look or leg, etc. The Matron being the Matron, she signed right up!

You see the Matron? She decided that she would tackle the tiniest little tube of fat that clings to her tummy. Now. . . . the Matron has eluded to a fine svelte self many times. In fact, the Matron, like many, many American women, has had 'issues' regarding food and weight. Let's just say 'ingestion,' all sort, is subject to a myriad of Matronly guidelines, restrictions and requirements, for a variety of quite legitimate health and ecological reasons and also, for a bountiful variety of wacko-superstitious and certifiable ones. Add to this psychiatric cocktail the fact that she is already an exercise addict, pounding out 4-5 miles six days a week. And practices yoga.

This past week, as the Matron -- who just had her first ever bone density test and was relieved to find out that she had any and was also warned that her BMI was a wee bit low -- launched an assault on the one pound of fat she possesses, something felt funny. A bit ridiculous, indeed, a forty-something woman in size 2 jeans and worrying about fat. Sort of reminded her of her misspent youth, actually. (that's another story that she'll probably tell some day)

So. . . . the Matron is cheering on the rest of you Derfwads as you trim down, pump up, tone!

On Wednesdays, instead of a photo of her fine ass or tubular tummy (true assessments), she will turn to the underlying impulse of Mrs. G's message, the heart of the matter-- the "will you please stop putting off this thing that is very important and will make your life better, maybe even save your life, somehow?" -- For the Matron, that isn't toning up or trimming down, but turning the novel her agent couldn't sell into the Young Adult version all the editors requested. After making a big whoopla with her New Year's Resolution, she hasn't changed more than a few pages.

Instead of a picture, she will report a page count. The commitment? Scares her. But the focus feels better than those size 2 jeans!

Now, the Matron knows Mrs. G. will be supportive, because that's not just the way Mrs. G. is, but a whole lot of women online! Indeed, the Matron's tiny corner of the internet is populated by generous, kind, and creative women. The Matron has quite the Star Trek image of the internet, all vast and threatening. Except that she -- and all the women she knows -- live in the pretty parts of Oz when online. In brilliant Disney Techno-color.

One of these generous, kind and creative types awarded the Matron this! Thanks Tootsie!

If you haven't visited Tootsie, scramble over. Not only does she have a wicked sense of humor, she isn't afraid to aim that arrow in her own direction. Plus, she has a sense of proportion, and I'm not talking curves (although that's working for her, too) here again, either. It's all about attitude.

Susan Carlin is another woman who has made her way into the Matronly milieu. After seeing this picture of Merrick on the Matron's blog, 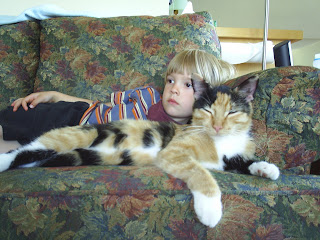 Susan sent her an email, asking if the Matron would mind if Susan created a painting from the photo - -and if not, would the Matron send a high-quality copy?

She didn't mind and she sent the photo. Weeks later, imagine the Matron's delight when Susan sent her this lovely image via email! 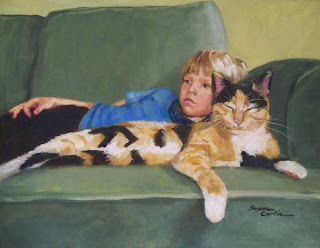 The Matron so loved the painting that she inquired about cost. But, given that her husband is a realtor (it's okay, you can get off the floor now) and funds are, well . . .hey! Where did all our money go?!!

Even though the price was reasonable, the painting was an extra that she sadly, but safely, declined.

So imagine. . . in a world where women rock! In a world where you do incredibly kind things for total strangers! Imagine . . . . the Matron's joy when Susan sent her the painting! Just contacted her, didn't ask for a dime (wouldn't even accept postage), and sent the unsold art to the mother of the subject.

Between Mrs. G, Tootsie and Susan, the Matron thinks she could pretty much live online. Disembodied consciousness might actually solve all her problems but that's back to the pathology part of the tale.

The painting is beautiful, and was such an incredibly lovely gesture! Good people, she is.

I can't think of anything to say about your size 2-ness that wouldn't sound like it's tinged with flaming hot envy. *Sigh* But I also think you're amazing for running six days a week.

Yes, what a beautiful painting and what a wonderful gesture.

You know, you COULD always just show us a picture of you! ;-)

We're here cheering you on, but only if you never refer to the size 2 or the regular running habit again. Sicko.

That painting is lovely.

What an incredibly beautiful painting - and how kind.

That Susan, she's swell. I am with you, Matron. The women on the web rock.

You definitely got to the heart of Mrs. G's intent. Though I personally will join Mrs. G with the ass focus.

Susan did a beautiful thing.

Thank you for the very kind words you left for me today. I feel decidedly more "writerly" than I did before.

are you seriously a size 2?

Holding out energy to run and write. You are a wonder Matron.

I'll be tuning in.

You go, Matron! I'm so envious of your 4-5 miles and am striving to be right there with you after I get through this damn 5K thing.

Your novel is SO important in so many ways and you have our unending support.

That painting is amazing. I'm with you, the women on the internet are beyond wonderful and I too feel so lucky to be a part of this community.