Comfort Zone? Where ARE you?

Yes indeed, the Matronly comfort zone is SO far away that Siberia looks downright next door.

Now, do not misunderstand. She is having--despite her urban inclination--a fabulous adventure. But adventures of any sort, particularly the fabulous, by definition require leaving the living room and the routine. The comfortable, comfortable routine.

First, the Matron is staying with her scientist friends (parents of Merrick's best friend and future husband, Lachlan) at the University of Minnesota's Lake Itasca Research Station. This would be an alien compound, full of cabins for students living on the lake doing all kinds of projects in even MORE cabins with foreign labels like "Neuroscience Lab" and "Entomology."

Get a bunch of these students with her professor-scientist friends who mentor and teach them--say, get them together for evening fish fries and swims and children's birthday parties--and you enter a strange, alien land (at least to the Matron) where people joke about lake scum and discuss the fine art of extracting parasites from fish brains. You know, regular old cocktail conversation, among very very very smart people who actually know what a microbe is.

Here would be the Matron: "Excuse me, excuse me! I've written two books?! I teach English? Anybody read anything good lately?"

Yes, they did, and it would have been science.

Nature also shook things up when one of these lumbered across her path during her very first run:

Of course, she was convinced that porcupines have projectile potential, so she stood way way back and watched that chicken cross the road. And yes, the scientists all reassured her that porcupines cannot shoot. Okey dokey.

She saw several of these.

Indeed, one stood in her path and stared so long that the Matron said: "You should go home now, sweetie." It did.

But aren't the best journeys psychological? (she has to say that because she's never been to Paris or China or very much anywhere else for that matter, so all of you world travelers, just give her this, okay?)

Ahem. So, journey of the spirit!

Today, the Matron and her husband decided it would be 'fun' to rent a couple extra bikes and take the entire family for an easy 17 mile jaunt around Lake Itasca.

Before continuing, please pause and consider:

Stryer, who is not really interesting in going.

Scarlett, who once bumped her elbow during a ski lesson and swore of Sport for all eternity, who has never ridden a bike with gears, who (unless this is a theater) is not a trooper, and who is prone to hysteria.

Merrick, who is slated to ride tandem behind John and has never been on a bike for more than his city block. But wild horses could not stop Merrick because he has learned there is a Fire Tower at mile 11 and he's all about that! The fire tower!!!!

The weather, with a forecast of occasional showers.

The bike path, which becomes a one way street about a quarter of the way in. Once you're in for 5 miles, you're in for the whole shebang.

Off they go! Within a mile, the Matron understands that hers are a loud people.

"WATCH OUT! ANOTHER BIKER IS COMING!"

"MOM! MY HANDS ARE BLISTERING!"

"HOW LONG TO THE FIRE TOWER?"

Scarlett starts weeping and wailing smack dab at the half mile mark. You see, she cannot possibly withstand the stress of shifting.

There are general squabbles and complaints and gentle light rain, here and there, and stops at the Headwaters and later the Gift Shop and one million thousand billion mosquitoes until they turn the corner of commitment onto the one-way trail of No Return and then they get this. 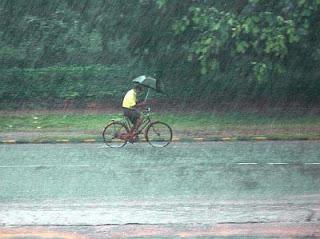 The skies part and the wrath of the Lord-Allah-Buddha-Oprah pours down upon the Matron and her children (John too, but he's a Man and can take it).

They are not even halfway through.

Rain like this means the Mosquito Feasting Invitational. They bike through hordes, visible as buzzing humming moving clouds. They bike up up up hills and down. Back up, up, up. At one point, Scarlett stops her bike on a hill and sobs (genuinely): "Mama! I can't make it!"

But she could. Indeed, the family had a Power Conference, during which love was declared for all and everybody agreed that nobody wold die and we would help each other get through this, no matter what. Indeed, even Scarlett started calling out encouraging words to Merrick!

And when they finally got to Mile 11 and saw the fire tower was another 2000 feet off the bike trail (reachable only by foot), even Merrick said he didn't want to stop: "Please don't make me!"

And then, finally! They emerged from the deep vale into civilization! A block ahead, the Visitor's Center, a mere 3 miles from the Bike Rental and the beloved, dear sweet savior van. Just as she was going to lead the battle cry for the last miles, the Matron turned back to see Merrick sobbing and blue, hanging on for dear life with one hand and holding the dam of his penis with the other, pleading for the bathroom.

The rain stopped. The Matron left Merrick and John in the Visitor's Center, where kindly staff immediately inquired about assistance? Not that the exhausted wet weeping, filthy, bug-bitten children looked bad. Her baby was wrapped up tight in warm blankets and waited, while the Matron and the big kids drove the final miles to the van.

At 3:30, the ride was finished. Not only did Merrick remain blue and peaked when popped into the van, the entire family decided they were STARVING. After 17 taxing miles and a missed lunch time, they were.

They descended like locusts on the local Inn and Restaurant.

And while they watched their locusts feed and start to retell each other stories about the day--how brave they were, the miles they rode, the ordeal they endured! -- the Matron and her husband smiled and held each other's soggy bitten hands. A fabulous adventure. Who needs Paris?
Posted by Minnesota Matron at 4:18 PM

An EASY 17 mile jaunt? In my opinion, 17 miles can't possible be easy. You were brave.

P.S. I've been to Lake Itasca. 20 years ago. I think it rained on our way there.

You are very, very brave. And wonderful.

I'm sure that's something your kids will never, ever forget.

Ya'll are completely crazy. It's very entertaining. I guess what doesn't kill you really does make you stronger...

Glad you guys made it through and it turned out okay - now you have another story that will be retold and bonded over for years and years which is probably worth the mosquitoes and sogginess. But I'm still pretty glad it was you and not me.

You rock. And I can't b'lieve there were hordes of mosquitoes in the rain. Tikes. Also, I am glad that your weather history aka lightning stalking did not show up in this otherwise lighthearted story. Lifetime memories for those kiddoes...

My recent adventure was somewhat less athletic, although it was technically called camping

That's what "they" say brings families closer together: a shared bad time that was overcome by all - and the memories that last a lifetime!

I used to curse my parents for those long bike rides. (Yes, I cried at times.)

But, it's true, it didn't kill me (just my love for bicycling), and now you have a great family story.

I can't believe you saw a porcupine! Very cool.

For goodness sake, that is appauling!
But, equally, amusing.

Wow. Your kids must feel like they can accomplish anything right now.

Goodness. You never wanted them to ride a bike again? 17 miles on the first time out? Merciful heavens I bet those children are sore.

No one needs Paris. But what an adventure. What a brave thing to do in the first place. And I'm SO proud everyone made it. And lived!

Nothing like misery and the fear of death to bring a family together:)

Oh man. You have a lovely family memory. And now I'm thinking that the other "happy families" I see doing this sort of thing maybe aren't quite what I think.

It reminds me of a horrendous cycle ride we had in the forest of dean - a never to be repeated experience!

people never believe me when i talk about the minnesota mosquitos. but i remember them. they are huge and evil.