The phrase 'lost in a book' does not do my life justice. You can eat, bathe, walk, talk, watch television, set a dinner table, load laundry, stand in a line and stir the soup while reading. If I find myself in line or in-between in any which way without a book--well, I would be somebody else. There's always something seductive in my purse and its fetching back-up in the van. Once during rush hour on the freeway, I looked over and noticed that the driver next to me had a book propped on the steering wheel: reading while driving. This seemed too good to be true! Of course.

When I was about 9, I determined that running an orphanage would be the World's Greatest Occupation because I would name all those babies. See, I had a long long list of luscious names and my dolls just weren't making the number: I needed legions. I loved Charlotte, Jo, Amy, Fern, Rhett, Scarlett, Blair, Margaret. Notice that theme?

The summer before I turned 10, I read The Exorcist and Gone With The Wind, in that order. In secret. For better or worse, those narratives shaped my world view. I named my one and only daughter Scarlett. Her middle name is a big kiss to John's mother, Sophie. And yes, the summer before I turned 10 I had nightmares and felt the value of a rosary in a way that all those years of Sunday school couldn't quite engender.

My own name has been a solid and enduring disappointment. Not only did Mary droop and sputter next to the ethereal Heathers and melodic Melanies of my youth, I had to share with everyone: my great-grandmother and my mother were both Mary as was every third girl on the block and in the pew. I have since learned that Mary and its derivatives form the most common female name on the PLANET.

John and I named our first dog Thurston. At the time, I was a graduate student in English. One of my professors queried: "How lovely. After Thurston Moore, the 16th century eligist?"

Gilligan's Island, of course. Can you begin to comprehend my pain over Scruffy, the unfortunate selection our latest family member arrived with? 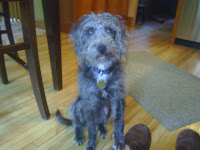 Doesn't he look like a Caspian? I pitched that name like a pro. Pretended he had somehow mysteriously been christianed thus and dropped fascinating observations about Caspians throughout time and planet. But the children morphed into small brick walls, boxed and impenetrable. Scruffy came with his name and they both stayed.

Stryker was a whim. Exactly nine months before our oldest child was born, John and I drank a bottle of wine and decided not to use the diaphragm just this once. If it was meant to be and all that. There was some degree of sobbing and shock about three weeks later. We selected a name with similar protracted debate. Our (old) address? 978 Stryker Avenue. The deal was done. John said, Stryker, boy or girl. I knew better. Scarlett was in my blood.

Our third child went a week without a name because I chose Elvis. John dug in his heels in horror. If the baby had been a girl, she would have been Emory Frances. Reader, you may use that name. It gives me physical pleasure: Emory Frances. I whisper this in my children's ears every night as guerrilla war fare for grandchildren, even though none of my three have hit puberty. This is serious.

Finally, we gave Stryker and Scarlett a short list of possibilities and let them choose: Merrick, Evan, Merritt, Emory, or Ellory. They chose Merrick.

Two weeks later, I introduced our new baby to a neighbor. He said (soberly), "Oh. After Merrick on the Yu-Gi-Oh show?"

Turns out, yes. It's spelled differently, but that's exactly who the two had in mind when they named their baby brother. I had picked names from the Social Security Administration's list of baby names for 1915. That seemed like a good year, before things got too crazy.

No woman could have enough children to satisfy my lust. Evan (for a girl, especially), Deirdre, Christian, Ellis, Louis, Drew and Adele. Renate (German), Ginger, Alan, Theodore, Jed. That's the preface to the introduction to the list of names I love.

There will always be the one(s) that got away.

Yours?
Posted by Minnesota Matron at 1:14 PM

Type (little) a aka Michele said...

I loved Daisy, Violet, Veronica, and Maya for girls.

Needless to say, I was nixed hard.

My daughter's middle name is Mary, after my mother in law, and then my sister in law went and named HER daughter Mary (as a first name).

I like Emory very much. I would have named a daughter Doyle, and her brother would have been named Theodore. I don't really do middle names.

My third child name was Flannery...no such luck.

Scarlet and Ruby are two of my favorites.

I've never cared for Heather (my name)...to me it evokes blonde and stripper pole. I would have liked a more solid name.

Your girl names are divine--and I love Emory Frances. When I was a child I would have given a kidney and my spleen to change my name to "Josephine Victoria Emmaline." Then I had children and had "Justine" and "Bridget" reserved for the girl I never got to have. All boys. All good, solid names that anybody over the age of 70 would recognize and specify their gender. I loved this post.

Up until about 2 months before she was born, my Honora (Nora) was going to be Sarah... we decided we liked the connection to my Irish clan and the fact that Honor was attached to the name and Mary, you sent me that lovely poem about the name "Mary" which shifted my sense of plainness associated with my own name.

I always feel sorry for my neighbor who lovingly named her newborn daughter Dora in 1999 - about a year before the television show came out and made the name permanently obnoxious.

Names of kids I didn't have: Silas, Thomas, Mary, Maria, Fiona, Maeve, Sinead. I could fill a convent with the girls' names!

I went through a Greek mythology phase that lasted for years. I was positive that I would name my daughters Athena, Atalanta, and Ariadne.

Well, this post brought back memories. I know I have a "name" list somewhere. (I save every little scrap of paper.) With three boys, my girl names were never used. I remember two of them - Frances and Emily. And I actually had other names for boys - Henry and Max.
However, I never considered having more children just to be able to use those names!

Mary-- I totally remember that poem. If you have it, would you please send me a copy? I can't find mine and thought it would be nice here.

Wonderful post. I don't think I can beat your name selections. I always loved the Seinfeld episode where George decided his son would be named Seven and then promptly had it stolen by the pregnant couple. I think about the same time they came out with Seven of Nine as the character name on Star Trek. So imaginative.

Can I say I love the names you chose, so classy? I particularly love Scarlet.


I am hung up on Charlotte, which is sad considering there will no more babies...

All those names are exquisite...

Thanks so very much for your encouraging comment on my blog today. I need all the cheerleaders I can get.

How did you ever find my blog? I enjoyed my visit here muchly. I know, 'muchly' is not very academic - but it's appropriate.

You guys rock! Josephine, hmmm? That's lovely. I too went through the Greek goddess phase with all those Athenas and even toyed with Aphrodite!! Oh my.

I've always been in love with names - I used to read those baby name books voraciously during my childhood - and now that I think about that habit, I bet it gave my mother fits. Anyway, the long path to my kids' names is too much to go into here, but I LOVE the name Emory Frances, it's beautiful.

NAMES
If I had to choose
just one name
to give a girl child,
it would be Mary,
placing her at
the center of all sorrow
which is to say
where all hope waits.